In order to give players a terrific gaming experience, Relax Gaming's Ramses' Revenge online slot includes some of the best and most intriguing extra features. As you spin the reels and compete for the ultimate reward of 49,996x, this game will keep you on the edge of your seat thanks to its extra spins, walking wilds, mystery symbols, and growing multipliers.

Simple steps will get you started with the Ramses Revenge casino slot: 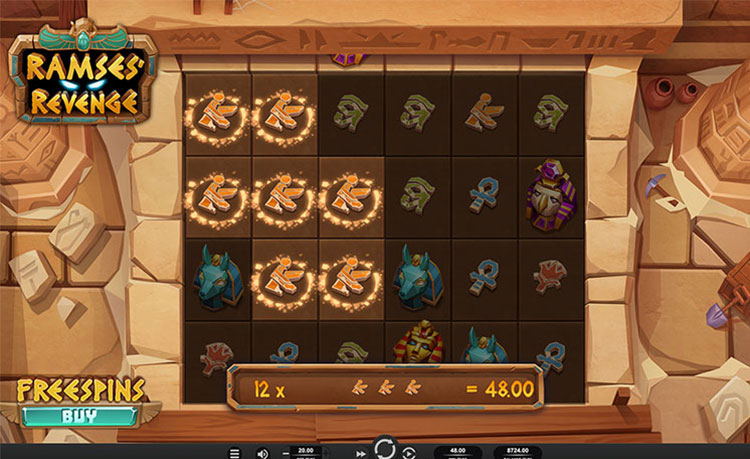 The Mystery Sandstorm in Ramses Revenge's base game can happen at any time. When this occurs, two to six sandstorm waves move across the reels. Each wave adds one to four mystery symbols to the reels. The same type of sign will be revealed for all of the mystery symbols once the sandstorm has passed.

Ramses' Revenge has a very recognisable Relax Gaming aesthetic, complete with excellent visuals. In this instance, the grid is flanked by columns, stone flooring, and scattered hieroglyphics in a jumbled courtyard. As the on-screen adventures go, a dreamy Arabic soundtrack drifts away, creating a soothing atmosphere.

The icons used have a little, collectable game token-like appearance. There are four low pay patterns and four high pay gods among the eight normal pay symbols. Anubis, Sobek, Horus, and Ramses are among the highest-paid individuals. In six-of-a-kind combos, these four are worth payments ranging from 1.5 to 4 times the original wager. Not much, although the pay system and wild multipliers during the bonus both assist. 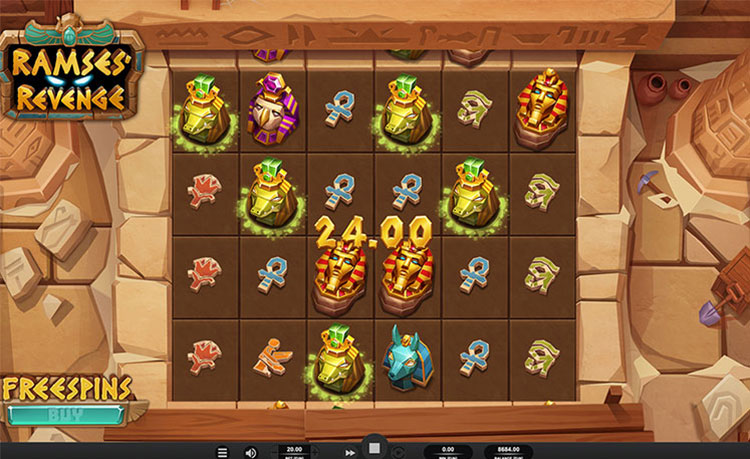 Ramses Revenge's extra spins bonus round is started when two or more explorer symbols land on the screen. The explorers are replaced with mummy symbols when the bonus game starts (by eating them). Then, these two symbols turn into walking wilds.

Despite being a game inspired by the past, the Ramses Revenge casino slot is surprisingly modern. Like with all of Relax Gaming’s titles, Ramses Revenge is fully compatible with all devices including mobile phones and tablets, making it great for gaming on the go.

If you’ve enjoyed our Ramses Revenge slot review and want to turn back the sands of time  yourself to play this game, then sign up and play today at Spin Genie.