The Monopoly Megaways developed by Big Time Gaming slot. The game has 6 reels and up to 117,649 ways to win. Big Time Gaming and Hasbro have collaborated to bring you this game, which can be played on all devices for as little as 10 per spin. Monopoly Megaways has a 96.5% Return To Player (RTP). This game has medium variance, every spin can result in a win of up to 3,500x your wager.

The Monopoly Megaways slot machine is a simple game just like the traditional board game. This slot makes use of the megaways system which is now getting popular among other slots out there. But before you play, have the following in mind. 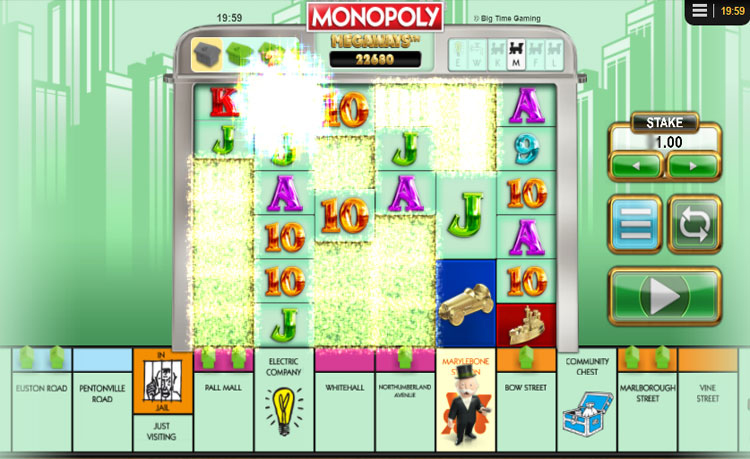 There are 4 bonus features in Monopoly Megaways. It begins by utilizing the typical Reactions feature featured in the majority of Megaways slots. This makes it possible to keep winning. As you play more, the Reel Adventure mechanic rewards you with extras like unlimited Megaways, additional free spins, better win multipliers, and extra houses for the Free Spins feature. The multiplier can grow in a variety of ways in this case.

The Reactions feature is used in Monopoly Megaways. In other Megaways games, this is referred to as the Cascading Reels or Cascading Symbols feature.

The contributing symbols vanish and are replaced by new symbols when you acquire a winning combination. This enables you to continue winning after each spin. Wins are created when matching symbols appear starting on reel 1.

Holy Diver Megaways initially broadcast the Reel Adventure film (from Big Time Gaming). Basically, it allows you the opportunity to update the game, which increases your chances of winning.

The Monopoly Megaways slot looks great, as one would expect. The reels are set on the Monopoly board, which is based on the iconic board game and was created in collaboration with Hasbro. As you can see from the green backdrop, the background represents the board game. The soundtrack has a jazz feel to it, with official graphics. 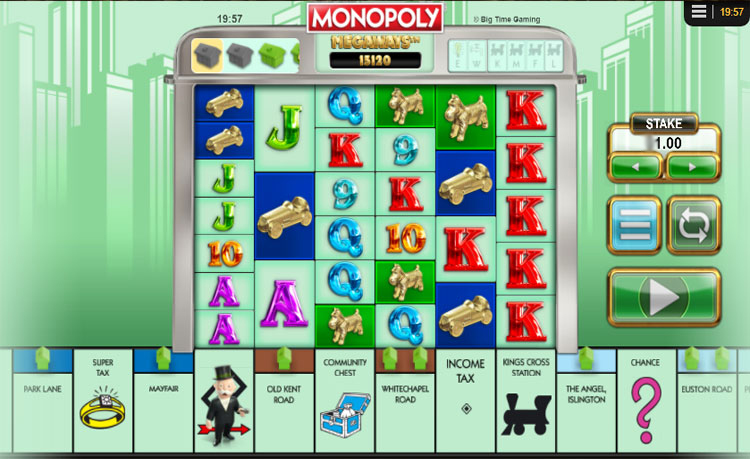 Finally, there is the Free Spins feature. Every time you trigger the Free Spins feature after the first time, you will receive 3 more free spins for a total of 11 at the start. Furthermore, you start with a 1x multiplier that increases by 1 for each utility you own. The feature is known as the Unlimited Win Multiplier. Every house on each property is landed on during the free spins will increase the multiplier by one. You will lose ownership of all train stations and utilities once the feature expires, but all houses on unvisited properties will remain unaffected.

Monopoly Megaways slot is a game that can be played on mobile, tablet, and desktop devices. It's ideal for use on the go or in the privacy of your own home. The game works on iOS, Android, and Windows devices. If real money play is your ultimate goal, Monopoly Megaways is an undeniably rewarding slot, with a top prize of 3500x your stake in the base game rising to a whopping 14,700x your stake in the free spins bonus.

Monopoly Megaways is a fantastic slot that combines the classic board game with two innovative game mechanics Megaways and Reel Adventure. Big Time Gaming has taken their innovations and applied them to a popular slot theme to create Monopoly Megaways and excelled themselves by bringing a popular mechanic to a classic brand. Visit or register at Spin Genie to experience the free spin feature. Keep track of your session budget with each playthrough, and always remember that moderation is key.