Which US Cities are the Best to Treat Yourself to a Luxurious Break?

Whether you’ve recently hit the jackpot via our Ontario online casino, or have been saving up for years, everybody deserves the chance to splash some cash! But with so many choices, it can be hard to decide where to go.

With this in mind, we’ve put together a luxury break index, with all the information you need to know when planning your next lavish trip to the US. We have explored which US cities charge the most to hire a sports car and the areas with the most 5-star hotels, Michelin-starred restaurants, and designer stores.

Most Luxurious US Cities

To kick off our US luxury break index we have collated a list of the most luxurious cities in America based on factors including the number of 5-star hotels, Michelin-star dining, designer stores and the highest price to hire a sports car. 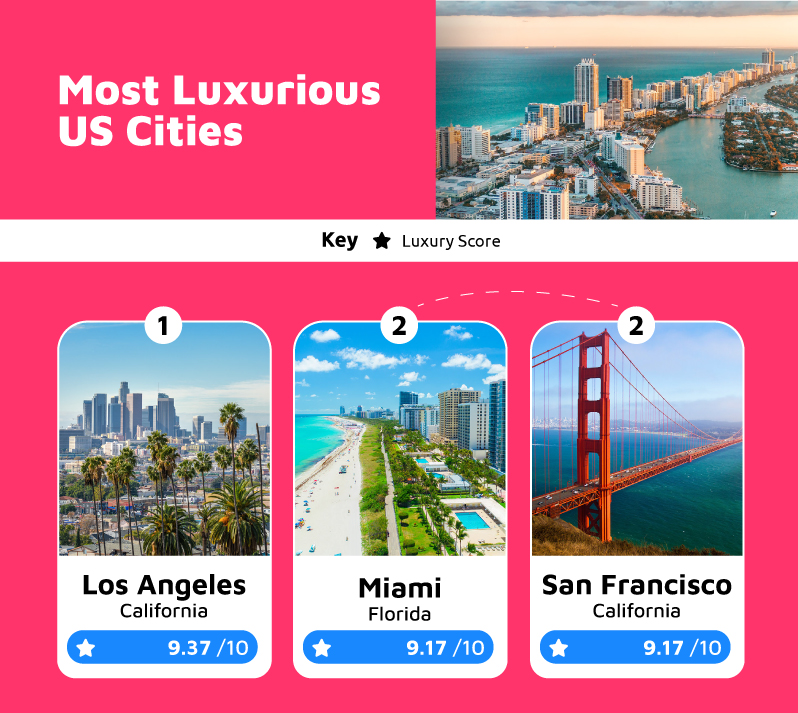 Taking the top spot, with a luxury score of 9.37 /10, is Los Angeles. This Californian city is famous for being a popular destination for film sets, including the iconic ‘La La Land’ (which won a BAFTA for best cinematography in 2016). All of this critical acclaim brings a plethora of affluent visitors, and as a result, this city has become a hotspot for anything luxurious. If you are looking for an expensive getaway then you will be spoilt for choice in Los Angeles!

Miami and San Francisco both take second place in this list of the most luxurious US cities. Although these two cities both have luxury scores of 9.17 /10, they offer very different forms of grandeur. If you are looking for A-star accommodation then Miami would be your best bet of the two due to its larger selection of 5-star hotels. However, if you are craving a fine-dining experience you should set your sights on San Francisco as they have three times as many Michelin-star restaurants as Miami! 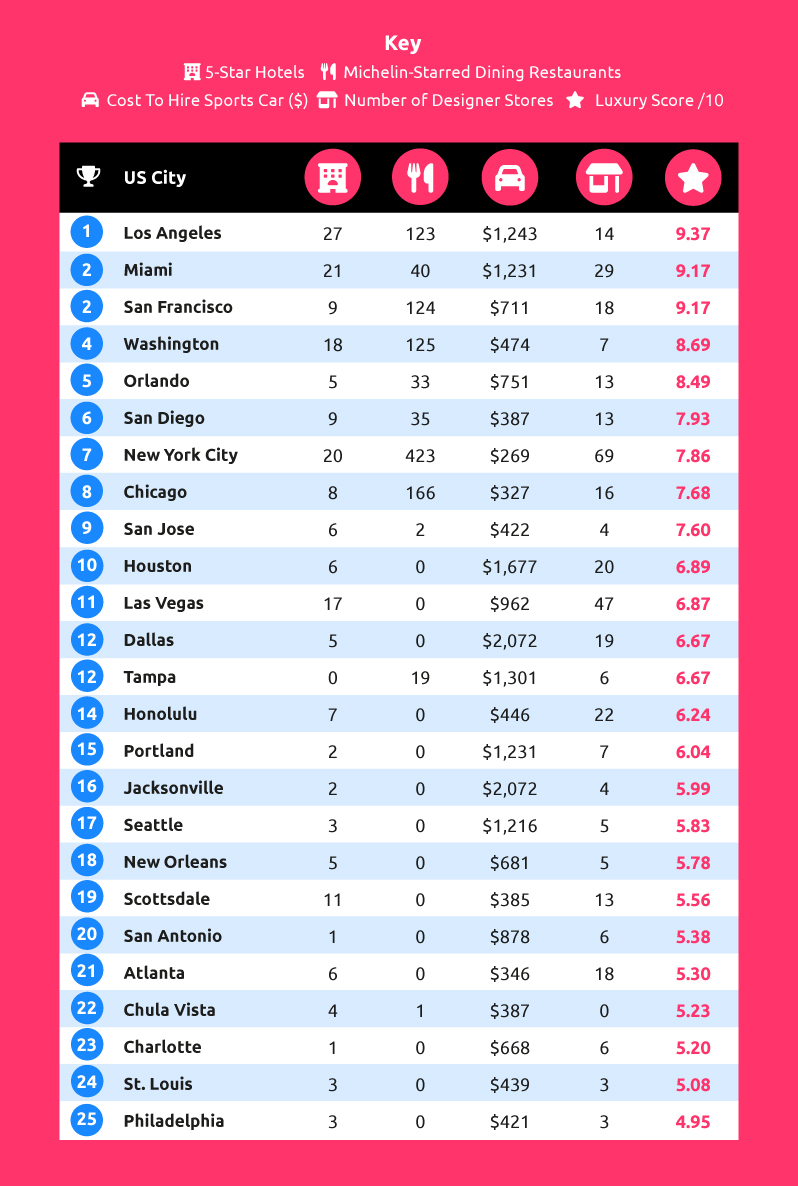 One of the most important aspects of a luxury getaway is the hotel. Standing out from their less extravagant counterparts with added amenities, a 5-star hotel will provide you with an experience you will never forget - but which US cities have the most 5-star hotels? 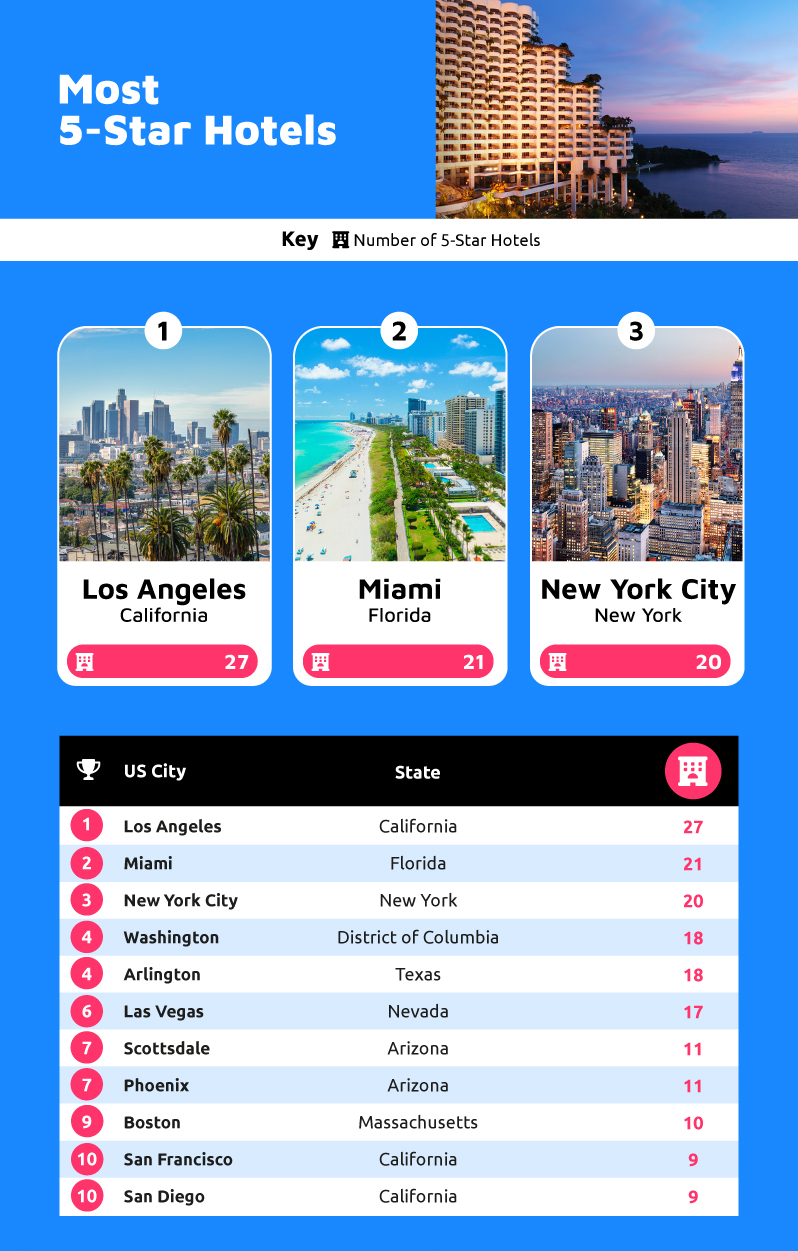 After being revealed as the most luxurious US city, it is no surprise that Los Angeles takes the top spot as having the most 5-star hotels. If you book a luxury break in one of the 27 highest-rated hotels in this city, you will be living the high life just like the many celebrities who have stayed here!

Miami is known for its incredible nightlife, and it appears that its accommodation is also highly regarded - evident by the numerous 5-star hotels in this city. If you aren’t interested in clubbing during your luxury break, you can still make the most of your stay by sunbathing in the all-inclusive outdoor pools.

Completing this top three, and just behind Miami in the ranking, is New York City which has 20 hotels with a 5-star rating. After you’ve visited the Statue of Liberty, and walked through Central Park, you will need somewhere to relax - and this city has got you covered with 20 of the finest 5-star hotels to choose from.

Whilst some fancy hotels provide food to their guests, other people may prefer to expand their horizons and make the most of their luxury getaway. Bearing this in mind, we wanted to see which US cities are currently home to the most Michelin-starred restaurants. 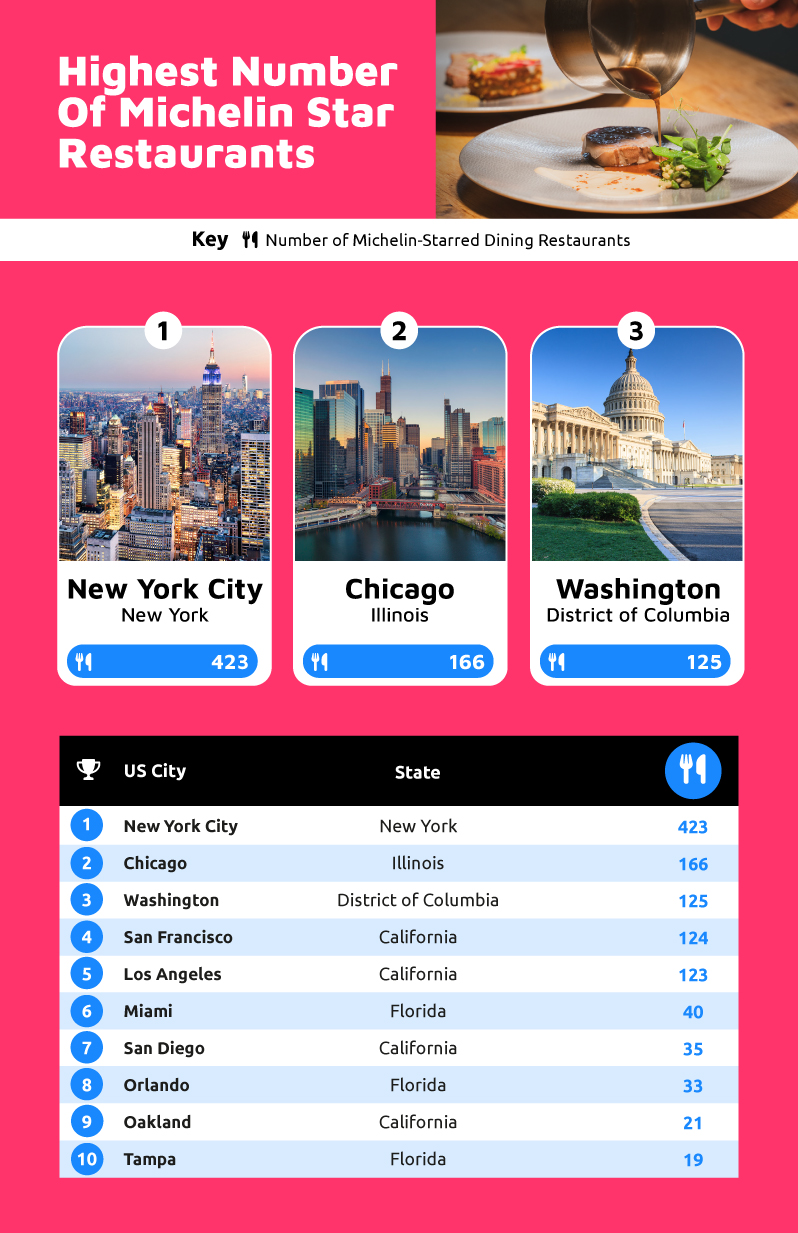 With over twice the amount of Michelin-starred restaurants than the city in second place, New York City deservedly takes the crown with a total of 423 Michelin-star restaurants. No matter what cuisine you are craving, there is likely to be a high-class option for you somewhere in this city!

Famously home to the White House and the US Capitol, the city of Washington is packed full of history. If you are looking for a mix of history and modernism for your luxury getaway then look no further, as you can explore the museums before dining at one of the 125 trendy Michelin-star restaurants.

Most Expensive US Cities To Hire A Sports Car

If you would like more of a thrill on your luxurious break (or just want to fulfil your Fast & Furious fantasy) then hiring a sports car could be perfect! We looked at the cost of hiring the most expensive sports car in each city for a long weekend, and here's what we found: 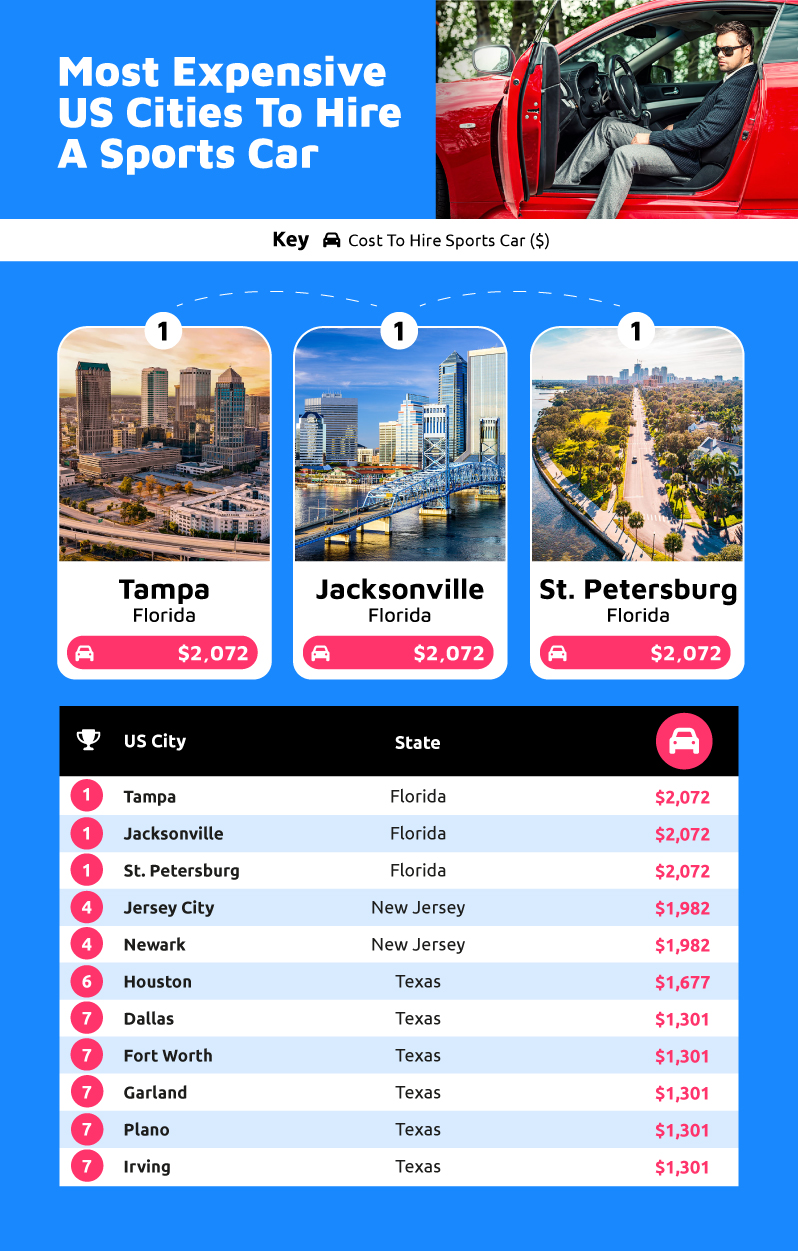 The entirety of these top three are cities residing in Florida - namely Tampa, Jacksonville and St. Petersburg. For each of these cities, the most expensive sports car costs $2,071.52 to hire for a long weekend, and as a result, they share the top spot.

With a high rate of traffic fatalities in comparison to other areas in the US, Tampa is strict when it comes to speeding. Therefore, if you are thinking of hiring a sports car here then hit the road with caution (and style).

If luxury sports cars pique your interest then Jacksonville is perfect! As well as treating yourself to an expensive car for the weekend, you can also visit the Jacksonville Sports Car Museum to learn more about the exotic motors you are driving.

The third and final Floridian city to feature in this number-one spot is St. Petersburg. As host to the annual Firestone Grand Prix, it is clear that this city has an interest in racing and cars. With a price tag of up to $2,701.52 to hire a sports car for a long weekend, St. Petersburg will ramp your luxury getaway up to the next level.

US Cities With The Most Designer Stores

Shopping ‘til you drop is a great way to spend a pretty penny, but how many designer stores are out there? We looked at a number of high-end fashion brands in order to see which US cities have the most designer stores. 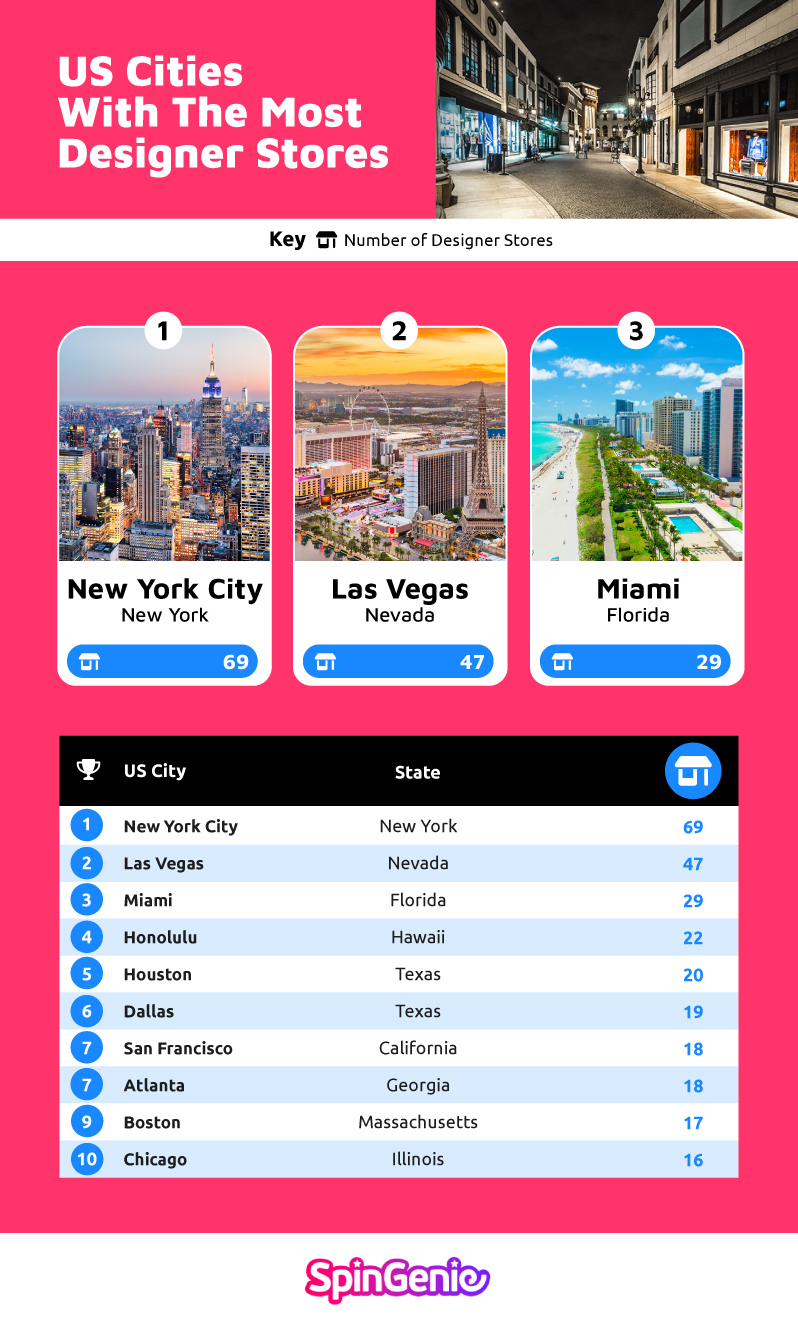 Making their second appearance in this US luxury break index is New York City. This city has cemented itself as a must-see Christmas destination, and what better way to treat your loved ones than in the 69 designer stores scattered around New York City?

Known as the ‘gambling capital of the world’, Las Vegas is primarily associated with casinos and nightlife. Having said this, it also appears that this city is one of the best places for designer stores - with a total of 47 to choose from. So whether you want to splash your cash on a bet, or the latest in luxury fashion, Las Vegas has you covered!

Making another appearance in our US luxury break index is Miami - this time completing the top three US cities with the most designer stores. Miami is home to a huge selection of shopping centers, including the Aventura Mall, which is ranked as the number one shopping destination in South Florida.

We used Census data to collate a list of the one hundred largest US states based on population.

We used Kayak to search for the number of hotels with a 5-star rating for each of the US cities as of November 2022. This website was also used to find the most expensive cost to hire a sports car in each US city between the 9th - 11th of December 2022.

Data from the MICHELIN Guide was used to determine the number of Michelin-starred restaurants in each US city as of November 2022.

Finally, we used the luxury-related factors (number of 5-star hotels, most expensive cost to hire a sports car, number of Michelin-starred restaurants and number of designer stores) and normalized each factor out of 10 before taking an average of those scores to get our overall luxury score for each US city.