Megaways Wolf Legend is an online slot created by Blueprint Gaming that makes use of the Megaways mechanic. On each spin, there are 6 reels and up to 117,649 ways to win. You have more winning opportunities the more symbols that land on the reels. Transforming symbols, free spins, and an infinite win multiplier are features. A gamble feature is also available. The game has a high volatility and a Return to Player (RTP) rate of 96.21%.

Wolf Legend Megaways could appear challenging to use, but it is just as simple as other slots. Before you start playing, keep the following in mind: 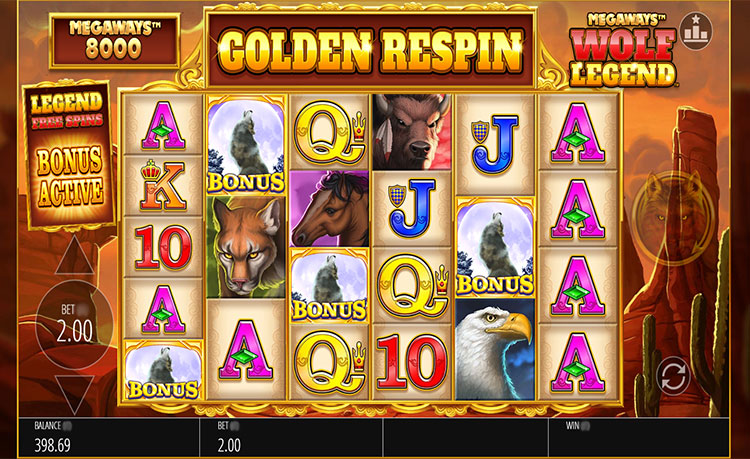 A distinctive canyon sunset symbol called the Mystery Symbol should be kept a lookout for. With the exception of the scatter, every instance of the Mystery symbol will change into the same matching symbol to complete a winning combination.

The dispersal is like a Wolf howling. You can activate the bonus feature by landing at least three of them anywhere on the reels. The number of free spins available here is not fixed. Instead, you will receive a random number of spins, ranging from 1 to 5, for each scatter. You are instead brought to the Golden Streak feature where there is an additional chance to win additional free spins before the bonus is played.

Every scatter that occurs in view increases your total number of free spins by 1 to 5 and provides you the option of starting with up to 3 lifelines (3, 4 or 5+ scatters give you 1, 2 or 3 lifelines, respectively). One lifeline is lost if a spin is made without landing a scatter. When all lifelines have been severed, the Golden Streak function expires.

It features the atmosphere of the American wild west, with a canyon as a backdrop and a howling soundtrack that isn't all that dissimilar from Buffalo Rising Megaways. The reels here include Cougars, Golden Wolves, Bison, Bald eagles, and A to 9 royals. The game's Wild symbol is a Grey Wolf, and the Scatter symbol is an image of a Wolf howling at the moon.

Similar to other Bonanza-style slots, the Free Spins feature is played, and the multiplier grows by 1 with each cascade. Retriggering the feature is also possible; 3 or 4 scatter symbols will award you 5 or 10 additional free spins, accordingly. If you don't feel like waiting for the bonus to expire, you may purchase it utilizing the Legend Free Spins Bonus Buy option for 75 times your total bet.

Wolf Legend Megaways may be played on both mobile and tablet devices, and Blueprint Gaming always makes sure that their games work well on all of them. Playing this game on your iPhone, iPad, or Android device is convenient and portable. Since HTML5 technology was used to create the Wolf Legend Megaways, the game's components and layout won't change.

The game Megaways Wolf Legend from Blueprint Gaming is a wonderful addition to slots out there. Players are guaranteed to enjoy the game's outstanding graphics and a variety of extra features. The only disadvantage is that it looks a little too much like Megaways Buffalo Rising, but it's still a good game on its own. To try the Wolf Legend Megaways, register at Spin Genie. Don't forget to plan your gaming budget appropriately and to take breaks occasionally.