Choo, choo! All aboard the Money Train! Five reels and four rows make up the Money Train online slot from Relax Gaming. The Wild West-themed game's bonus round is triggered by landing scatter symbols on reels 1, 3, and 5. During the bonus spins, special golden symbols, expanding reels, and multipliers all appear. If this sounds exciting to you, then keep on reading our Money Train slot review to learn more. 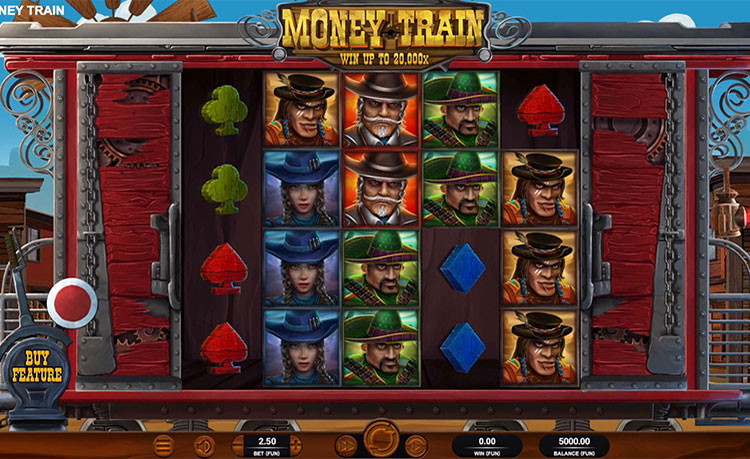 The distinctive feature of the Money Train slot machine is its variable return to player (RTP).

The game boasts a very respectable return to player (RTP) of 96.2 per cent, which is 0.2% higher than the current market average. However, if you decide to pay 80x your wager to trigger the Money Cart Bonus round, the RTP increases to an astonishing 98%.

The Wild symbol is represented by two shotguns. This symbol can replace all other symbols in the game, with the exception of the Bonus Scatter, so it's entirely possible to win without spinning up the necessary number of matching symbols if a strategically positioned Wild comes to your aid.

If during regular play you aren't fortunate enough to activate the feature, you can purchase it for 80 times your current bet.

Nobody is surprised by the popularity of slots with Wild West/Prospecting themes, which is why Relax Gaming wants to get in on the fun with their Money Train slot online. The entire concept has been masterfully executed, paying close attention to every detail. Even the metal carriage's opening shutters, which cover the reels, have some childish graffiti on them. The lower-value icons in the game are carved wooden playing card suites, while the higher-value icons are a bevvy of nefarious characters. 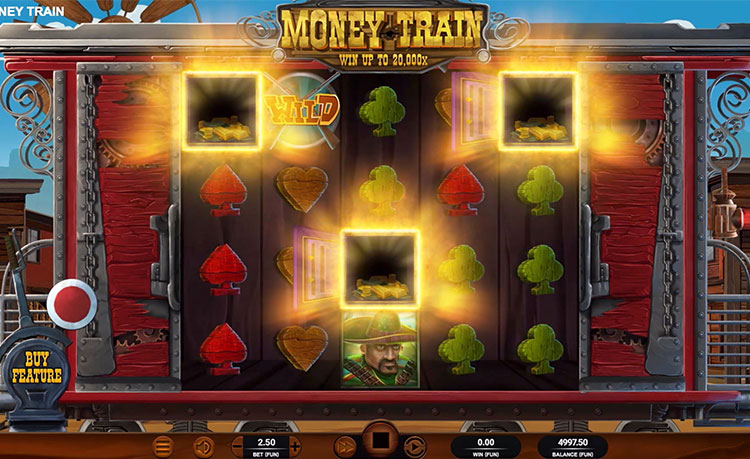 The Money Train Money Cart Bonus is this casino slot’s version of a free spins bonus round…on steroids. You must spin three Bonus Scatter symbols anywhere on the reels to unlock this feature, which is the game's standout feature, in the Money Train slot machine. As soon as this happens, a new screen with six extra modifiers and entirely new icons will appear.

At the beginning of the Money Cart Bonus, three bonus spins are given. Your round-starting Bonus Scatters are still present, and they have changed into multipliers that start at 1x and increase based on the modifier symbols you spin up. The primary symbol on the reels is a tumbleweed, however, it doesn't offer any payouts. Every time a new modifier symbol is seen, the Free Spins counter is reset to 3.

Spin a Money Safe symbol to reveal a bet multiplier. The Payer sign also displays the multiplier, however, it is combined with every other symbol on the reels. All other visible symbols receive a sticky multiplier when the Persistent Payer indicator is present, and this multiplier remains in effect for subsequent spins as well. After giving out a multiplier, the Widener adds another reel, increasing your chances of winning. The Collector symbol awards a multiplier before adding all of the other values that may be seen throughout the reels to their worth. The Persistent Collector achieves the same result but additionally keeps adding the value of additional symbols for the remaining spins.

There is absolutely no need for downloads because the Money Train mobile slot was made in HTML5. No matter what device you use, the game starts immediately in your browser, so all you need is a strong internet connection to enjoy spinning the reels. Money Train has been completely optimised for flawless display on all gadgets, including smartphones and tablets. Whatever device you use to play, this game will look fantastic.