With every turn of the reels in Medallion Megaways, a gorgeous online slot game from Fantasma Games, players have the chance to win one of up to 46,656 different ways.

The game offers players a sizable earning potential as well as a variety of incredible extras, including free spins, re-spins, and growing multipliers! If all this sounds like majestically magical fun to you, then keep on reading our Medallion Megaways slot review. 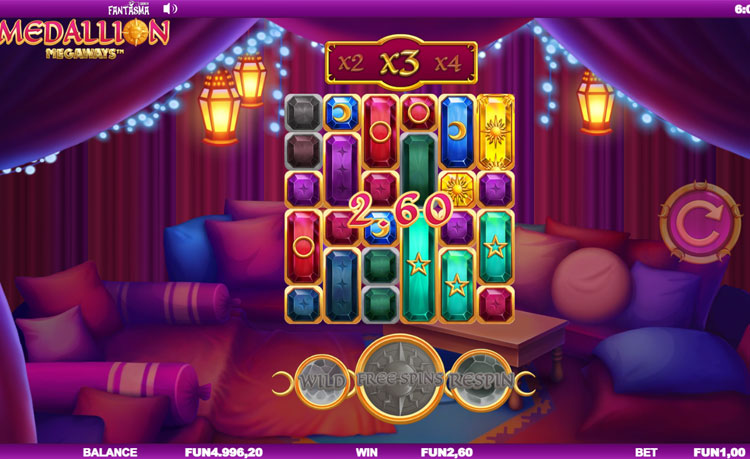 As you spin the reels of Medallion Megaways, you can cash in on some incredibly generous prizes thanks to a number of fantastic bonuses.

The primary bonus on this slot machine is called Feature Stones, and it can be activated at the end of any spin:

Medallion Megaways has an extremely attractive appearance. This online slot features lushly colored drapes and pillows and is located in a charming tent. The symbols all appear as vibrant stones of various colors that pop off the screen.

The Medallion Megaways slot online, according to the Fantasma design team, was influenced by the Tarot. Even if tarot cards don't have any symbols that are specifically associated with them, the impact is still noticeable. It's a highly original approach to a slot theme, and it provides a fun gaming environment. 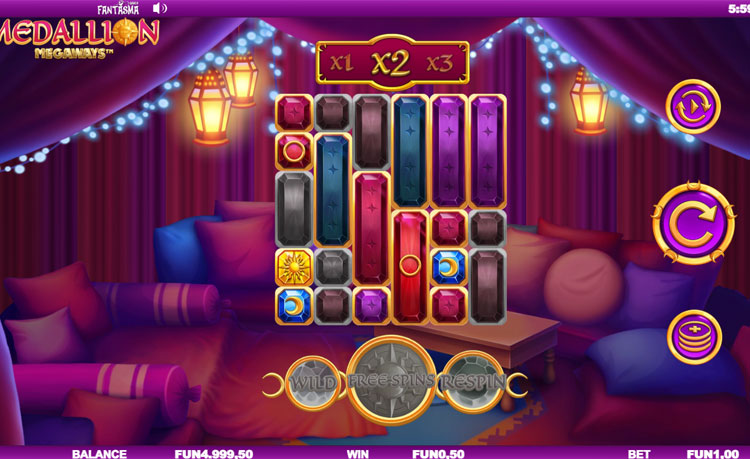 You'll get 10 free spins when the bonus game starts. Because both of the Feature Stones are active throughout this bonus and your multiplier isn't reset between spins, there is incredible winning potential to be had during the free spins.

No matter what gadget you're using to play, the Medallion Megaways mobile slot looks fantastic. The square form of the reels gives the game a particularly attractive appearance in portrait mode on mobile devices. You can expect a wonderful online gaming experience whether you play from your desktop computer at home or while you're on the go.

The Medallion Megaways slot is a mystical and enchanting adventure that presents both a new theme and a new challenge to players. To try out this slot machine sign up and play today at Spin Genie ON.