Enjoy thrilling drama and enormous prizes on the Great Rhino Megaways slot machine thanks to Pragmatic Play's decision to add a megaways system to one of their classic games, Great Rhino. It features a six-reel setup with increasing standard rows and a horizontal top reel that adds a row to reels giving the game 200704 paylines. It has a Return to Player (RTP) rate of 96.48% with high level of volatility, and a 20000x maximum win.

The steps to remember before playing Great Rhino Megaways are: 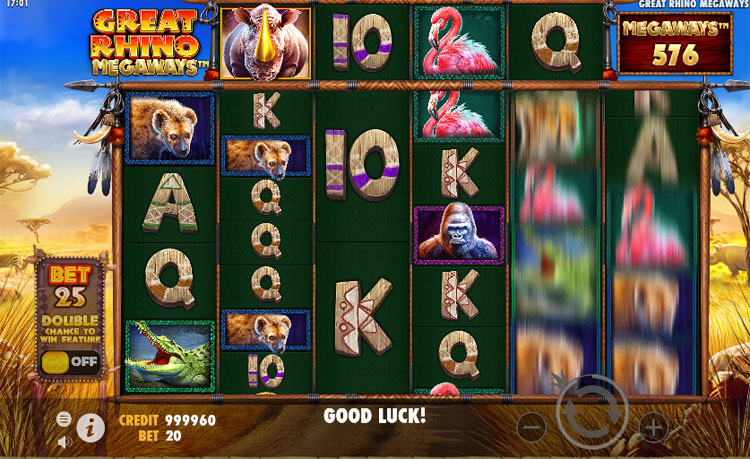 The Cheetah is by far the top animal in terms of rewards. The Gorilla, the second-highest paying symbol here pays 10 times less. Along with the typical low-value royal symbols, other animal symbols can be found that pay out similar but lower sums. Except for the Cheetah, which also pays for two on a payline, you must have between three and six matching symbols to be the winner.

You'll activate the Tumble mechanisms after each victory (also called Cascading reels or Avalanche feature). As winning symbols are cleared out to make place for fresh ones that fall from above, it can help you produce more winners per spin.

You'll also profit from a wild symbol that shows a Stampeding Rhinoceros with a Golden Horn. However, the wild symbol only appears on the top row's reels from positions two to five and replaces all other symbols to aid in the formation of winning combinations.

On the left side of the reels, there is an Ante Bet option that you can select to activate. It will slightly raise your minimum wager, but in exchange you virtually double your odds of naturally initiating the crucial free spins bonus round in the game.

Great Rhino Megaways is the initial Megaways slot from Pragmatic Play. Although the developer is using a new format, the graphic design is well-known.The symbols in the game are created using Pragmatic Play's signature aesthetic, which combines realistic and comic book-style images to create an eye-catching design that entices you to play. Its safari themed look also makes it more stunning for players who really like wildlife. 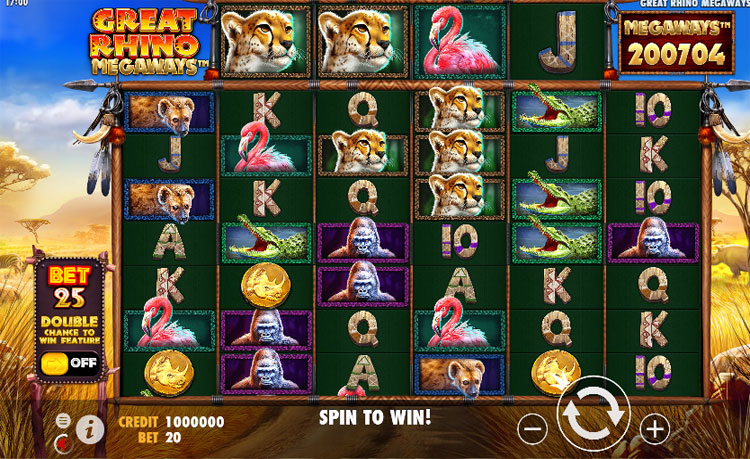 To activate the free spins bonus, at least three Great Rhino Golden Coin Scatter symbols must appear on the same spin. You can then select the appropriate progressive multiplier's starting multiplier and the amount of spins you want to play. Everything works as follows:

The Great Rhino Megaways slot is playable on PC, tablet and mobile phone because it uses HTML5 format. Although there are better megaways slots out there than this slot. The Great Rhino redesign is excellent, and the base gameplay spins are never the same twice, making this slot with a naturalistic theme exciting.

Looking back, this release isn't the most intricate or creative Megaways slot ever created, but it offers good numbers and solid gameplay, therefore it's one of the games of Pragmatic Play megaways slots that people liked. Try Great Rhino Megaways for a spin here at Spin Genie and experience a new wildlife adventure. Just make sure that you don’t play any more than you should, having a break now and again is recommended.