The Gladiator: Road to Rome slot game's action takes place on a 5x3 reel setup with 25 fixed paylines. It was inspired by the Gladiator film (2000). A winning combination is created when 3, 4, or 5 identical symbols or wilds appear across a payline, starting from reel 1, starting from left to right. The game has a medium volatility and a Return to Player (RTP) rate of 95.05%.

The Gladiator Road to Rome video slot is really easy to use and navigate. Below are some things you need to remember. 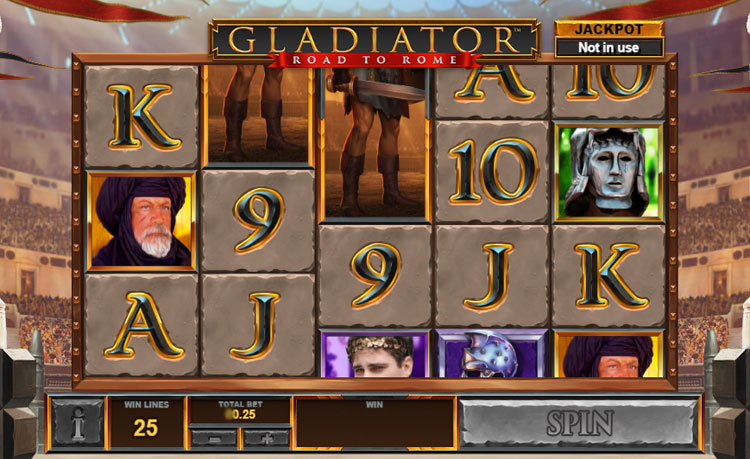 The Gladiator is the most profitable symbol. A payoff of 40x your total bet, line up 5 of them to form a payline. When the Gladiator symbol appears fully stacked, it turns into a wild and can replace all other symbols to help complete winning combinations. There are 2 different scatter symbols, and landing enough of each one on the same spin will start a bonus round. Landing three Helmet bonus symbols initiates the Gladiator bonus feature. After that, you can select one of nine helmets that offer bronze, silver, or gold awards. You'll receive a reward for each helmet. Naturally, gold helmets are the most valuable. The progressive jackpot is won if you find 9 gold Helmets.

Moreover, By landing three or more weapon scatter symbols anywhere on the reels during the same spin, you can access the Colosseum Free Games bonus. You'll receive 5, 8 or 12 free spins if you get 3, 4 or 5 scatters and a chance to pick from different game modifiers that are discussed in the free spin section.

The Gladiator: Road to Rome slot machine is the official video game for the 2000 Ridley Scott film, Gladiator. Both viewers and critics agreed that the film was a huge success. In any case, this slot adaptation's design stays loyal to the original. Symbols are depicted on stone blocks against the backdrop of an enormous Roman amphitheater (the Colosseum). A cast from the film appears alongside the lower value A, K, Q, J, 10, and 9-10 royals on the reels. They include Commodus (Joaquin Phoenix), Lucilla (Connie Nielsen), Proximo (Oliver Reed), Tigris of Gaul (Sven-Ole Thorsen), and the Gladiator. 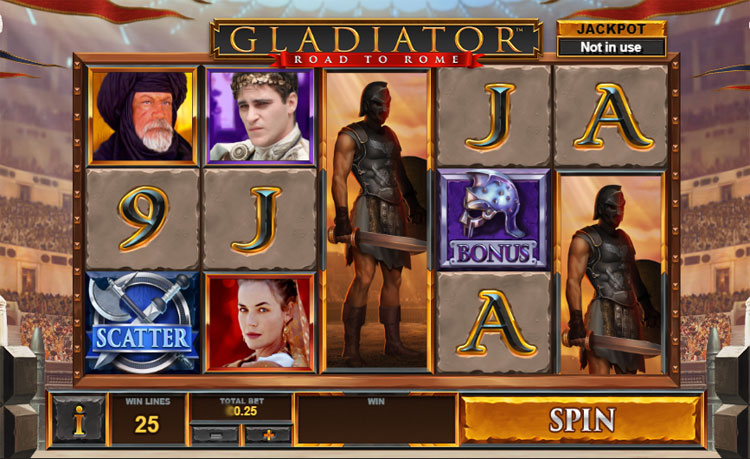 Before the Bonus Spins starts, you will be given three choices to grant one of the following modifiers: additional free spins, a win multiplier, a boost to the payout of symbols, an additional wild symbol, the ability to use symbols as scatters, or a Gladiator Wild Nudge. When the bonus is active, you can trigger an additional round of 5 free spins by landing 3 scatters for free games. During this fresh round of free spins, the same modifiers from the initial trigger are still in effect. For a limitless number of more free spins, you can retrigger.

Using HTML5 technology, the Gladiator: Road to Rome has been completely optimized to be played on any device with the same feel and experience. This indicates that it can be played on computers, tablets, and smartphones without any differences in the gameplay itself. The 5x3 reel setup arrangement is also effective on any portable devices.

The Gladiator Road to Rome slot machine has gained a ton of popularity since its debut in 2017. The extra features have enormous prize potential, the jackpots are large, and the design is elegant and very pleasing to the eyes, especially if you are fond of Ancient Rome games. Visit Spin Genie to sign up for this new adventure. Budgets shouldn't be exceeded because winnings come and go. Keep in mind to occasionally take a break.