Cash Patrol is an online slot machine that is spiced up by engaging in cops and robbers theme. This slot machine includes prize pot-collecting bonus spins and a money collecting feature that includes a number of unique Collect Symbols. As they say, If it ain’t broke don’t fix it seems to be the guiding principle behind this Slot Machine. Instead of apprehending criminals you’re tasked to focus on collecting kickbacks around the city. 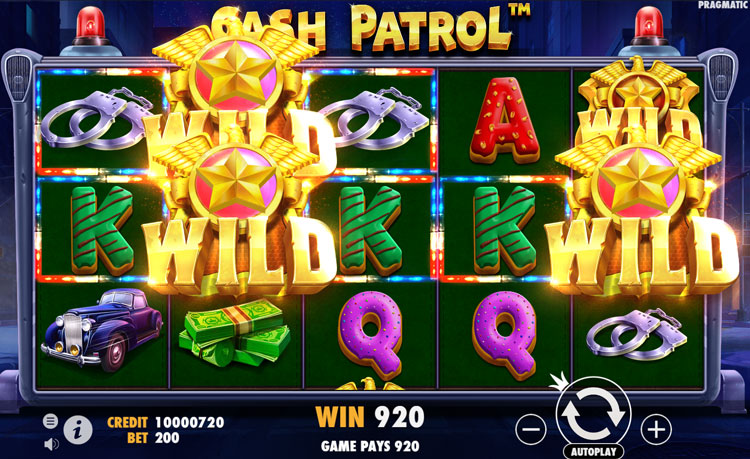 In cash patrol police officers appear on the stand at reel 5 The cackling villains lands on reels 1 to 4 that reveals cash values Depending on the type of Collect symbol where these events occur. These events may occur when one Money symbol appears the same as the collect symbol. All money symbol values are tallied up and given as one before being collected. The amount of the Extra Credit Collect feature is added to the sum of all Money Symbols. Applying a multiplier to the total of all visible money symbols is called Multiplier Collect. When reels with a money symbol are selected they expand and fill all available spaces that makes it possible for expanding collect to happen. The visible currency symbols are kept in place while other cells respin.Any value of the Money Symbol that is still visible after the respin is gathered. This is how Respin Collect in Cash Patrol Happens

Cash Patrol is spiced up by introducing a cops n’ robbers theme. Where crime fighting is seen at the first glance of the game but it’s really what the game is about. Cash Patrol might alternatively be about crooked policemen prowling the neighborhood and raking in bribes from kickbacks. Whatever may be your preference, the action takes place on a game board placed in the center of a windy street scenario in a city like Chicago or New York. This game urges the players to believe that they are fighting against crime on the side of the law but they serve as double agents focused on kickbacks and bribes. 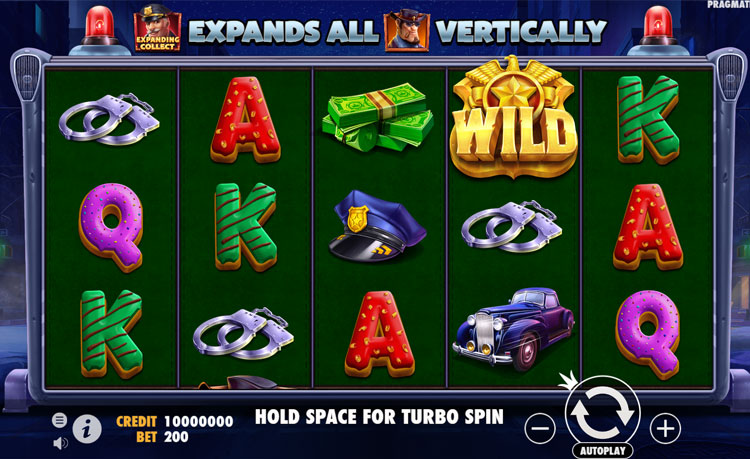 8 free spins are given when three scatter symbols land to start this bonus round. Money and Collect symbols are active just as they are in the regular game during free spins. On the other hand, when Money symbols appear, their values are also saved in a unique bonus pot. After the round of free spins is over, a huge Money symbol appears on the first four reels and the fifth reel starts to spin again. The bonus pot's worth is added to the win from the free spins total if a Money Symbol lands on the fifth reel.

To talk about the mobile look and feel, mostly focusing on the mobile experience and if there’s something unique about it, or to talk about what’s different for the mobile version

The action takes place on a game board set in the middle of a windy street scene in a city like Chicago or New York. Text on the game invites players to pretend they are on the side of law enforcement or act as double agents being led to the loot. Pragmatic Play has presented everything in a humorous manner to lighten the mood, as is frequently the case in these cops 'n crime games, which is further enhanced by a bouncy, jazzy, ska track. Cash Patrol takes players on a funnier journey through crime and its prevention. Playable on desktop, tablet, or mobile devices, Cash Patrol offers convenience for all of them.

Cash Patrol is available at Spin Genie Ontario. SpinGenie strives to offer a fantastic user experience and top-notch entertainment in a safe and secure setting.With one of the widest selection of slots and casino games you can visit Spin Genie to play Cash Patrol. This slot is a comical look at law enforcement but don’t be surprised if the game offers more in terms of wins.