The Cost of a Rolex Around the World Revealed

Watches are widely known for their classic style pieces, but when it comes to a Rolex, this classic timepiece exudes prestige, elegance, and class.

Having been around since 1905, Rolex has become somewhat of a historical significance, one that can last even through an economic crisis. Much like fine jewelry, a Rolex seems to only go up in value.

When it comes to the most well-known Rolexes, the Submariner is easily one of the brand's most popular dive watches ever produced. Adored by professional divers and collectors alike, this much-loved watch epitomizes the perfect mix of metal, colorful bezels along, and its iconic black dial with large luminescent hour markers.

Dating all the way back to 1953, this legendary timepiece is one of the longest-running wristwatches in the brand's history. It even made its way to mainstream entertainment after appearing in the first ever James Bond movie.

That’s why the Canadien-based, Ontario online casino experts at Spin Genie decided to take a deep dive across the globe in order to find out which countries in the world sell this iconic classic the cheapest.

The best countries to buy a Rolex

One major reason for the US succeeding to sustain cheaper prices was largely due to the plummeting value of the pound. This meant that the watches sold in the UK were much cheaper than for buyers in the US who shop in dollars. In response, the Geneva-based brand increased its prices in Europe by approximately 5%.

The UK has been known as a haven for cheap luxury watches over the last few years. However, in very recent times it seems that due to the collapsing pound value, this perception is gradually changing. A similar thing can also be said for the majority of countries in Europe.

According to its official page, it seems Rolex sets a standard price across many European countries. Over 12 countries are currency priced at $9,075 (£7,500 | €8,724) for the Submariner no-date which equates to an estimated €8,724.

The Submariner Oyster, 41 mm, Oystersteel has seen an estimated 4.9% increase since the start of this year. This is unsurprising considering that in January the Swiss luxury watch brand bumped up its prices in most European markets by 3.5% on average across its various models with a few in-demand watches soaring up to 10% more costly.

Unlike most other European countries, Germany breaks away from the standard set price, costing $9,103 (£7,522 | €8,750). This is approximately 0.30% higher than the average price of the Submariner Oyster when compared to other European markets. 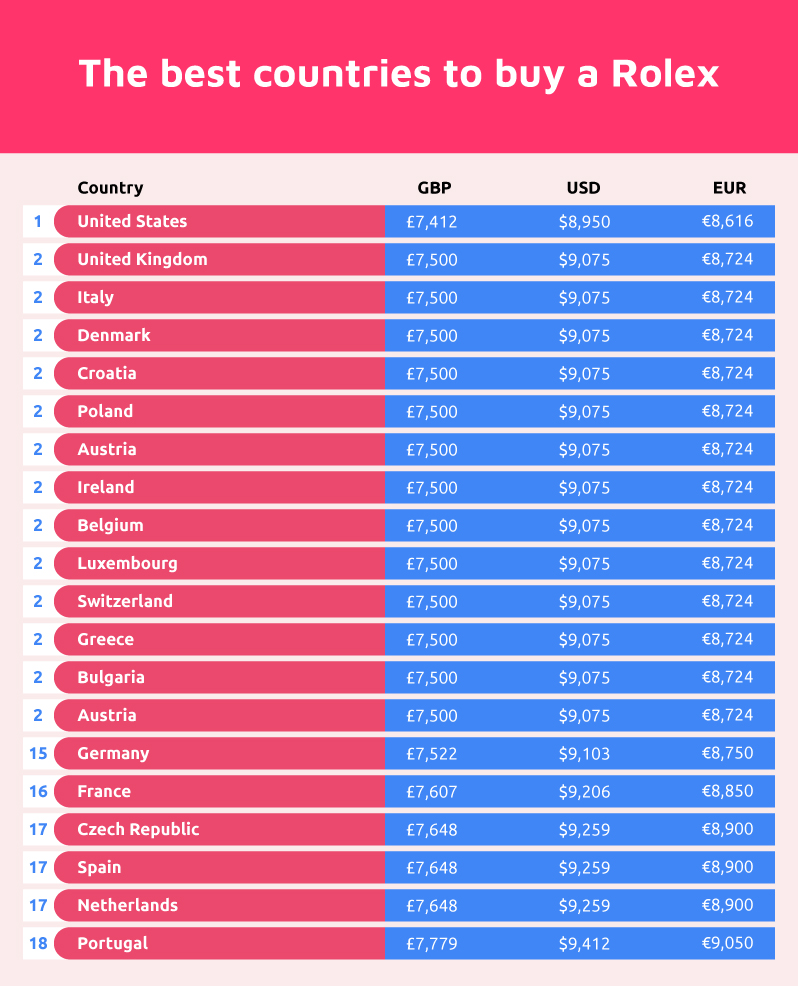 The most expensive countries to buy a Rolex

Portugal takes first place as one of the most expensive countries to buy a Rolex. Interestingly although many other countries in Europe are priced around the $8,000 mark, it seems the Portuguese-speaking country demands more from its prospective customers with the same model Submariner costing $9,412 (£7,779 | €9,050). This is particularly estimated to be 4% more than the average European country.

Considering that many of the Rolex jewelers in Portugal sell this pristine watch in euros it plays a significant role in its price disparity. Earlier this year, the value of the euro fell below parity with the US dollar amid signs of economic fragility across Europe and soaring inflation.

Though not quite as expensive as Portugal, this price is still significantly higher than in most other European countries. As a matter of fact, this highlights a 2% difference. When compared to Germany, this shows a 1.7% increase.

France follows closely behind in third place costing a total of $9,206 (£7,607 | €8,850). This is over $131 more than the average price for other countries such as the UK and Italy. Therefore, it highlights a 1.43% increase if you were to buy the same model Submariner Oyster, 41 mm, Oystersteel in France.

The rarest Rolex watches of all time 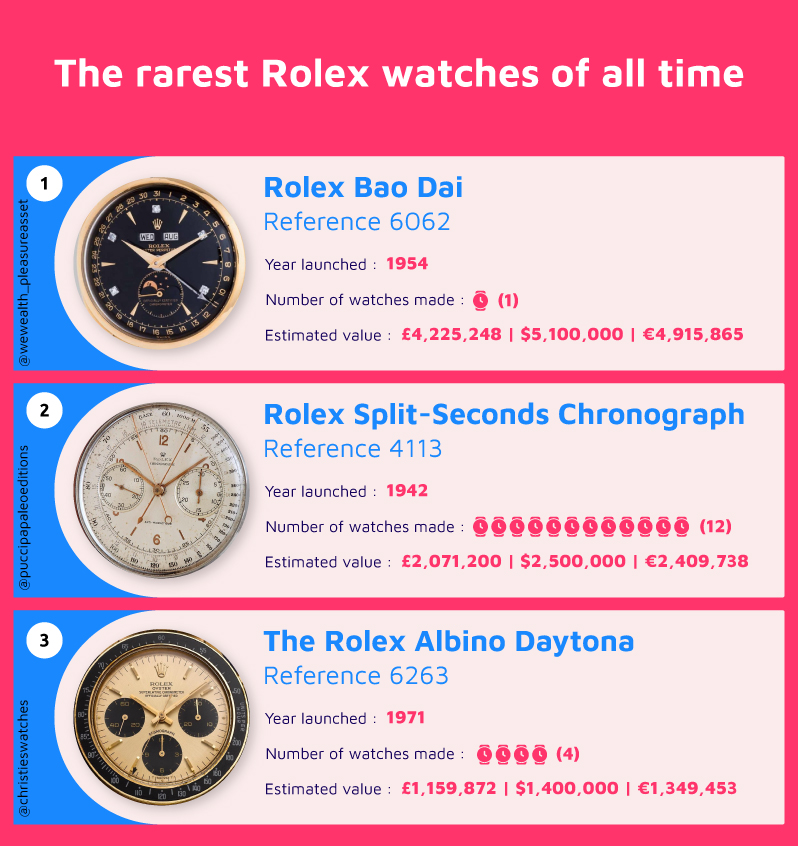 In first place is the Rolex Bao Dai which has been dubbed the rarest Rolex watch. Only one of these timeless pieces has ever been made in history and it was specially crafted in 1954 for the last emperor of Vietnam.

Costing over $5.1 million (£4.2 million | €4.9 million), it's no surprise that this watch held the record for the most expensive Rolex for a few years.

Produced in 1942, the Rolex Split-Seconds Chronograph was thought to have only twelve known copies though the watch was never offered for sale. With an estimated value of $2.5 million (£2.1 million | €2.4 million), it is believed that these watches were created and given out to race-car drivers who were in association with Rolex at the time.

The Rolex Albino Daytona comes in third place, first launched in 1971, it is believed that only four samples were ever created but only two have been accounted for so far.

This model is widely called the ‘albino’ as it is particularly rare to its subdials being silver - like the majority of the dial. This strays away from its typical black and white. Due to its extreme rarity, it is now estimated to be worth $1.4 million (£1.2 million | €1.3 million).

The value of Rolex watches 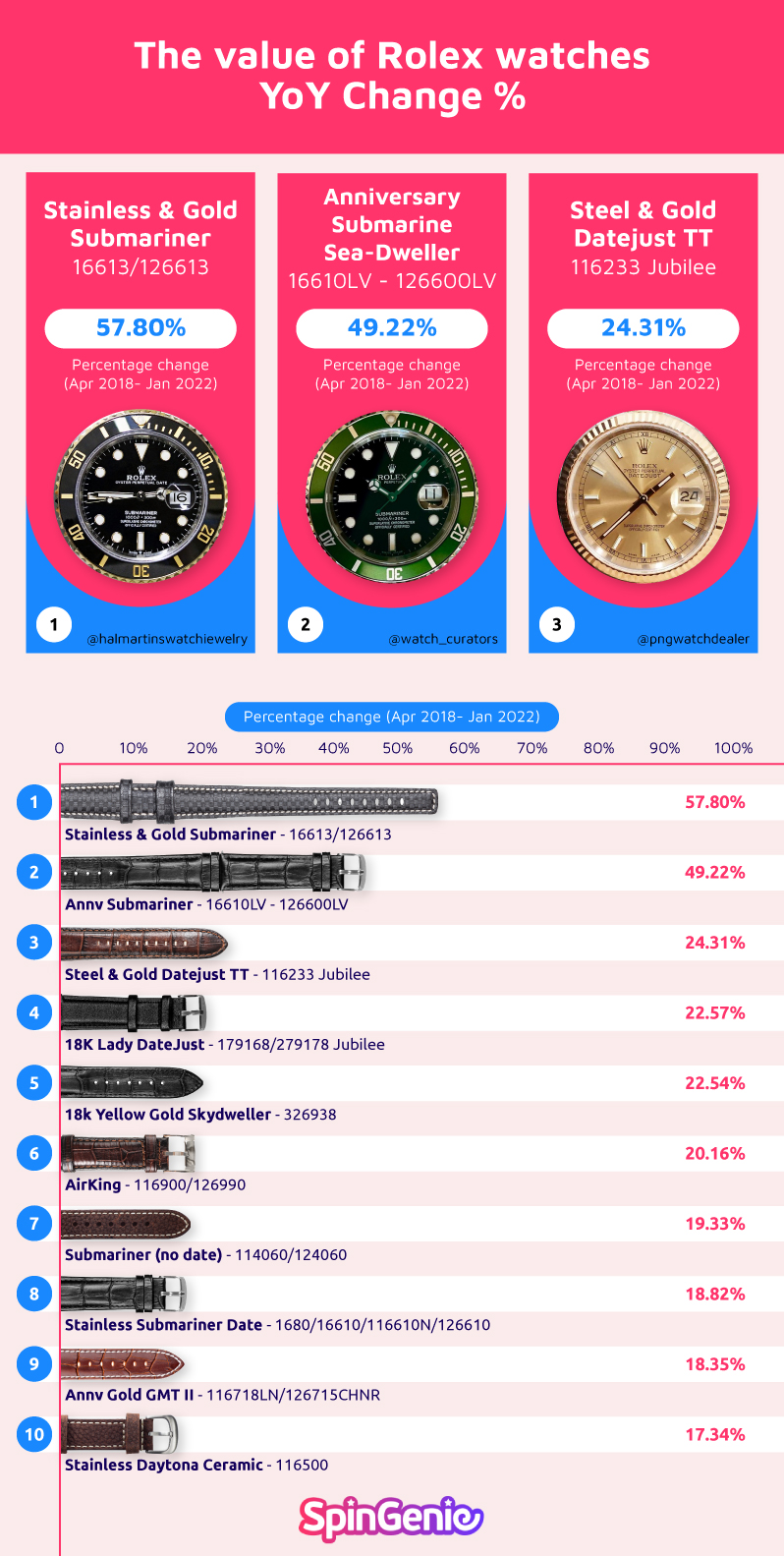 This comes as no surprise considering Rolex is one of the most popular Swiss luxury watch brands in the world, with a market share close to 29% and annual sales of around $7.9 billion (£6.5 billion | €7.6 billion). This essentially allows the Geneva-based company to raise its prices when necessary to keep up with currency fluctuations.

The Anniversary Submariner / Sea-Dweller takes second place with a value increase of approximately 49.22% from April 2018 to January 2022. This Rolex was first released in 2003, it was a special edition to celebrate the Submariner’s 50th anniversary. Its distinctive features included a green bezel and a maxi dial.

Though the production of the Submariner-Date anniversary edition (16610 LV) ended back in 2010, the 50th-anniversary special edition Sea-Dweller took over (126600LV). After a further increase in September of this year, this watch is now priced at $13,129 (£10,850 | €12,519). The latest version of this classic piece adopts a more luminescent display with its ceramic bezel.

This steady increase comes as a result of Rolex increasing its prices. Not only did the Swiss luxury watch brand increase its prices by around 4% at the outset of this year, but it has also increased its prices further by approximately 4-7% as of September 2022.

All data were collected via the official Rolex site, taking into account only the Submariner Oyster, 41 mm, Oystersteel prices from across the globe. Not all the prices for each country were shown so this research only takes into consideration the countries where its price was visible.

Further details on the rising prices of Rolex watches in the European market can be found on Bloomberg. This information was used to further explain the increase in the cost of a Rolex in Europe compared to other key markets.

Data for the rarest Rolex watches of all time were collected using Google search. The figures are taken and then ranked. Additional sources such as Forbes were also used.

Information and figures on the year-on-year percentage change for the value of Rolex watches were based on a price evolution chart scoured on Google. The chart was originally done in USD which was then converted into GBP and EUR.