Depending on who you decide to follow, supporting a team in any sport can either bring you great joy, or great sorrow. Despite the pain your team can cause you, loyalty is a big part of sport, and changing teams is never an option.

Loyalty for fans means going to games, home and away, buying the team’s merchandise and wearing it proudly. However, this can get expensive for fans and when your team is losing, it only adds to the frustration.

Whilst some fans can pay to support their team through the best online casino in Ontario, others pay through their hard-earned wages. That’s why we wanted to find out which NFL and CFL teams are the most expensive to support. We’ve looked at matchday and season tickets, merchandise, food and drink in stadiums, and parking to find out the most expensive teams to follow.

The Most Expensive NFL Team To Be A Fan Of

We’ve looked at the price of beer, soft drinks, hotdogs, parking, team hats and jerseys, as well as matchday tickets to find out which team is the most expensive. 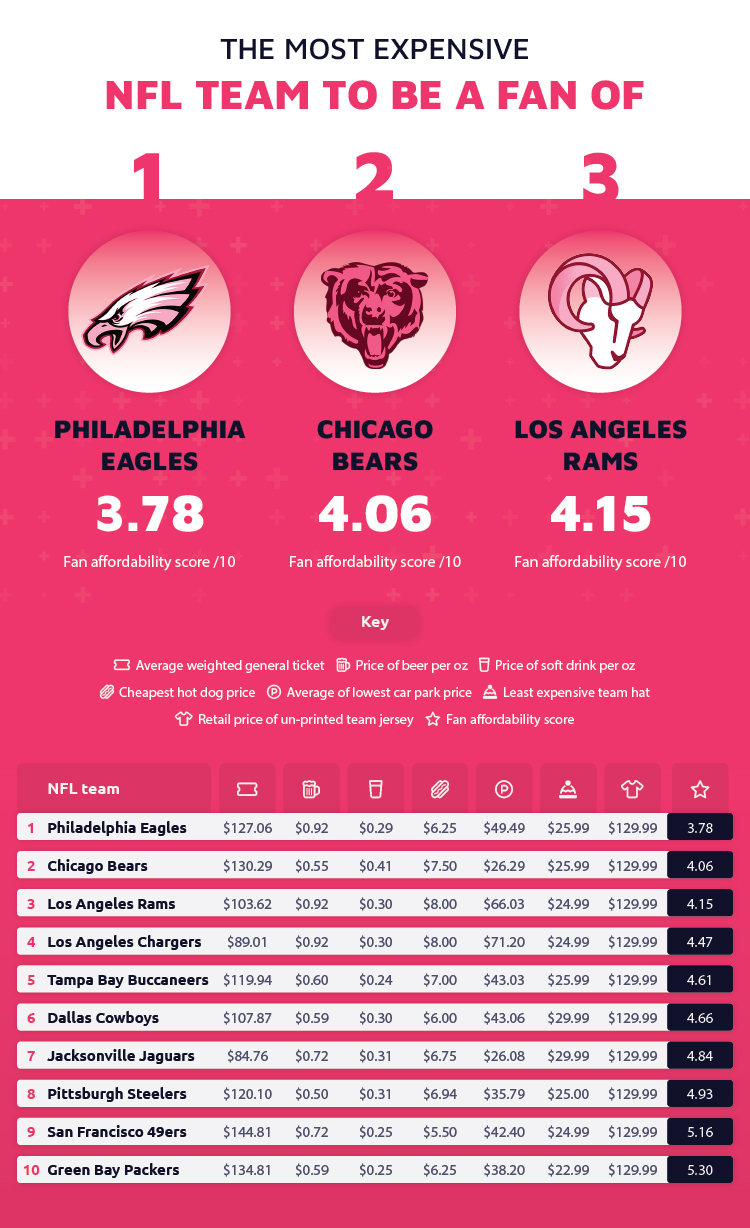 The Philadelphia Eagles takes the title as the most expensive team to follow in the NFL. The Eagles have already clinched a playoff berth for the 2022 season, but for their fans who have been going to the games, it’s been costing them a lot of money. The price of beer at the Lincoln Financial Field is the joint highest in the NFL at $0.92 per oz, alongside the Los Angeles Rams and the Los Angeles Chargers. The Eagles also have the sixth most expensive matchday ticket at $127.

The Chicago Bears take second place with an affordability score of 4.06 out of 10. The Bears have the fifth most expensive ticket price at just over $130, as well as the most expensive soft drink price per oz. This could be forgiven if their performances on the field were good, however, they have lost 10 of their 13 games so far in the 2022 season. It’s not a great time to be a Bears fan.

The Cheapest NFL Team To Be A Fan Of

Using the same data, we found out which team in the NFL is the cheapest to follow. 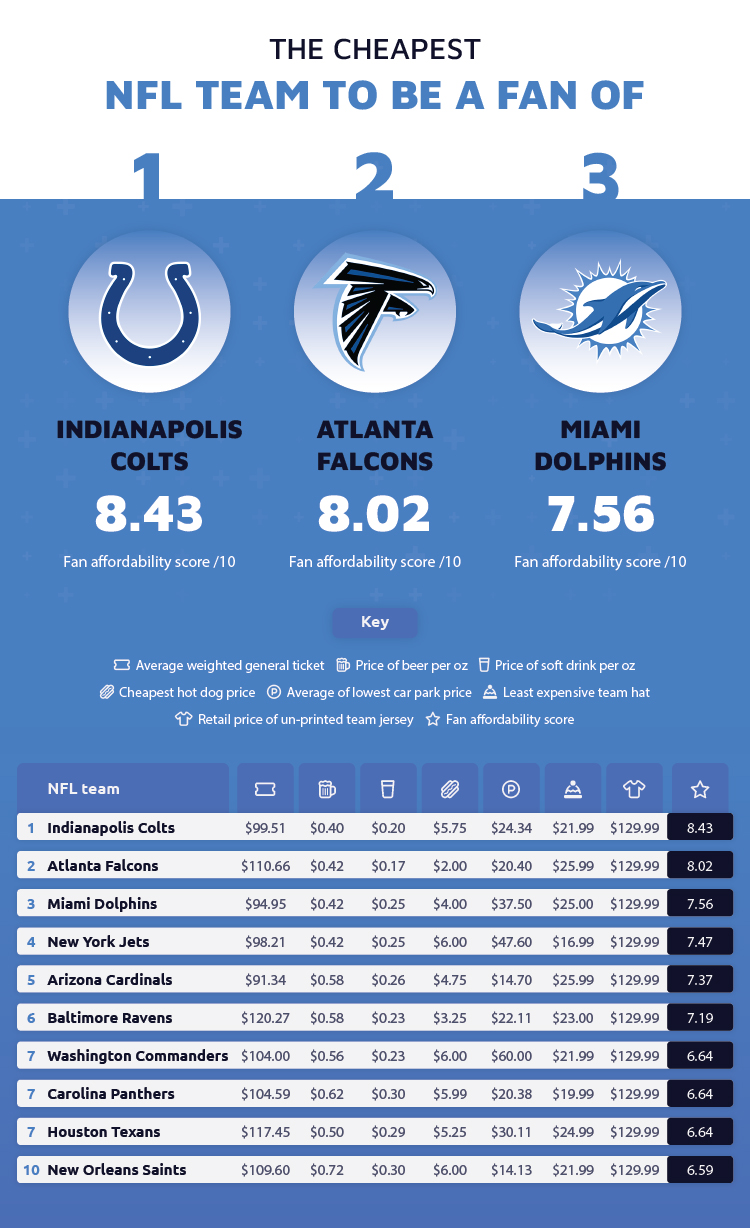 The cheapest NFL team to follow is the Indianapolis Colts with a fan affordability score of 8.43. If you want to enjoy a drink during the match, then the Colts offer the cheapest beer price and the third cheapest soft drink price. Other than their hot dog prices, the Colts are in the top 10 for every category. They might not be the most in-form team right now, but they can claim the championship for the cheapest team to support in the NFL.

Atlanta Falcons takes second place in our list of cheapest teams to follow, with a fan affordability score of 8.02 out of 10. The food and drink prices at the Mercedes-Benz Stadium are amongst the cheapest in the NFL. The Falcons have the cheapest soft drink and hot dog prices, as well as the joint second-cheapest beer price. A perfect place to go and enjoy a snack whilst watching.

Completing our top three is the Miami Dolphins with an affordability score of 7.56 out of 10. Despite having to pay almost $40 dollars for car parking on game day, the Dolphins’ food and drink prices are very reasonable. They also have one of the lowest gameday ticket prices in the league at just under $95.

We’ve totalled the cost over the season to follow each team, and found out the income per capita in each state to discover the teams that will cost the most your income to follow. 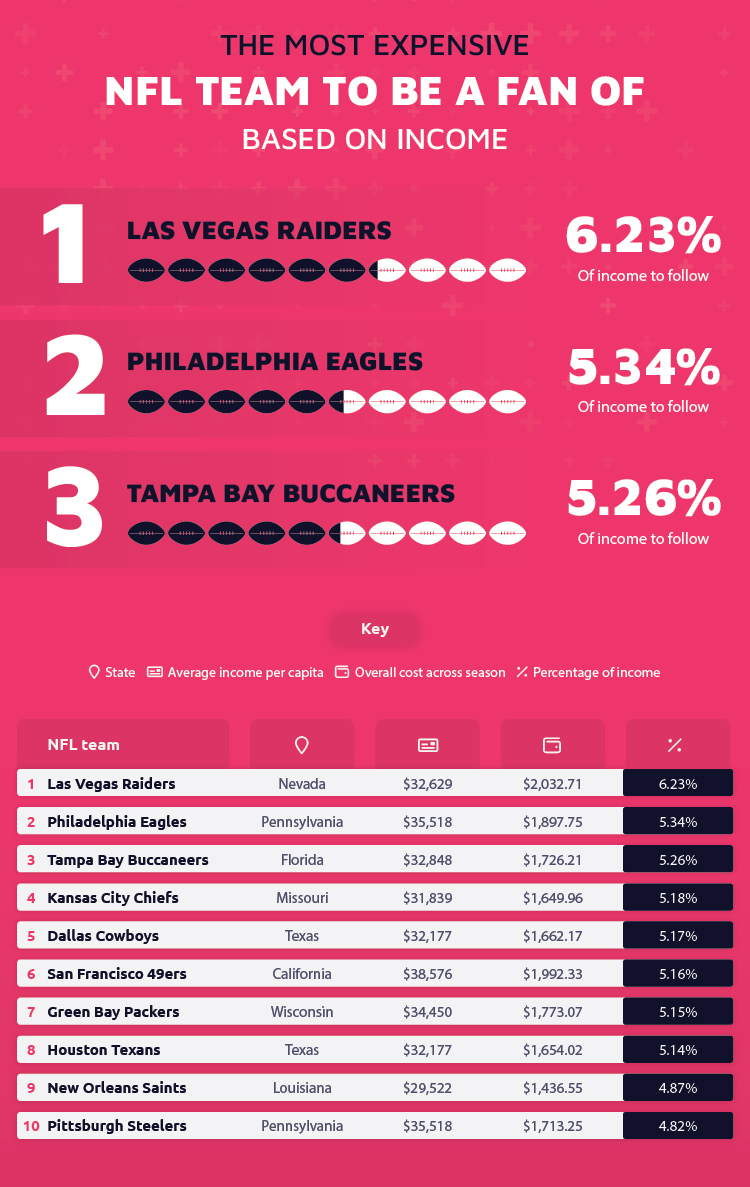 The Las Vegas Raiders take first place as the most expensive team to follow based on the state’s average income. Supporting the Raiders will cost you 6.23% of your income on average. The average income in Nevada is just over $32,500 a year, with the total cost to follow the team coming in at around $2,000, which is the highest total cost of any NFL team.

In second place is the Philadelphia Eagles. The average income per person in Pennsylvania is $35,500. With the cost of supporting the Eagles sitting at just under $1,900, you will have to spend 5.34% of your income to follow the team.

Completing our top three is the Tampa Bay Buccaneers with 5.26% of your income being spent on following the team. The average income in Florida is $32,800, and the overall cost to follow the Bucs comes in at $1,726.

We’ve looked at the teams requiring the lowest percentage of income to find out which teams are the cheapest to support. 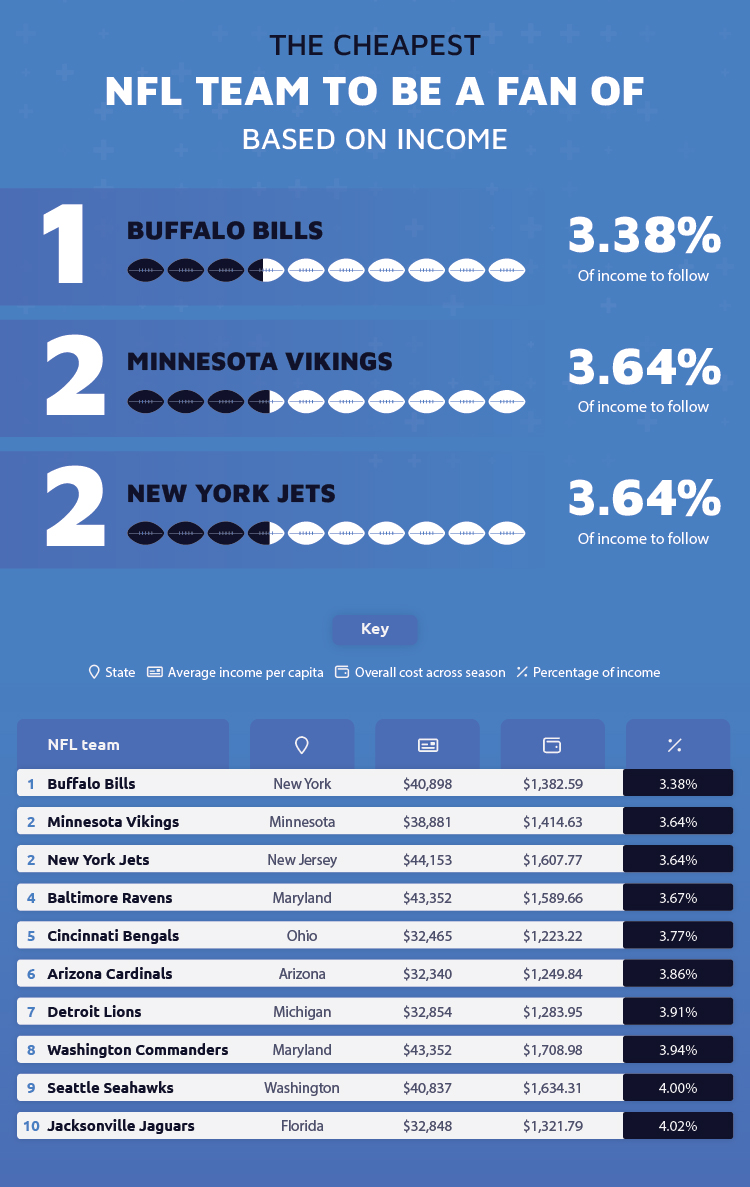 Buffalo Bills takes the top spot with just 3.38% of your income being spent to support the team. In New York, the average income sits at just under $41,000, with the cost of supporting the Bills totalling just under $1,400.

In second place is the Minnesota Vikings with 3.64% of your income being spent to support the team. The average income in Minnesota is almost $39,000, and the total cost across an NFL season is just over $1,400.

The Most Expensive CFL Team To Be A Fan Of

We’ve looked at the price of a jersey, a team hat, beer, hotdogs, and the cheapest 2023 season ticket to find out which team is the most expensive to support. 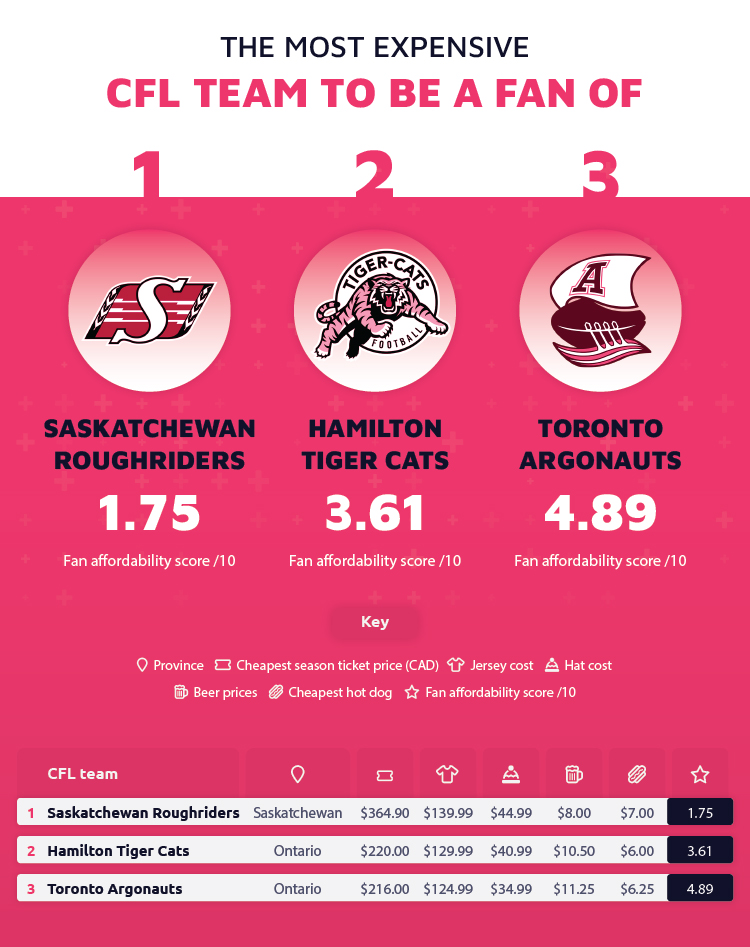 Completing our top three is the Toronto Argonauts who had a fan affordability score of 4.89. The Argonauts have the most expensive beer out of all the CFL teams, as well as the third most expensive hot dog. They also have the second cheapest hat, joint with the Montreal Alouettes.

The Cheapest CFL Team To Be A Fan Of

Using the same data, we wanted to find out which CFL teams were the cheapest to be a fan of. 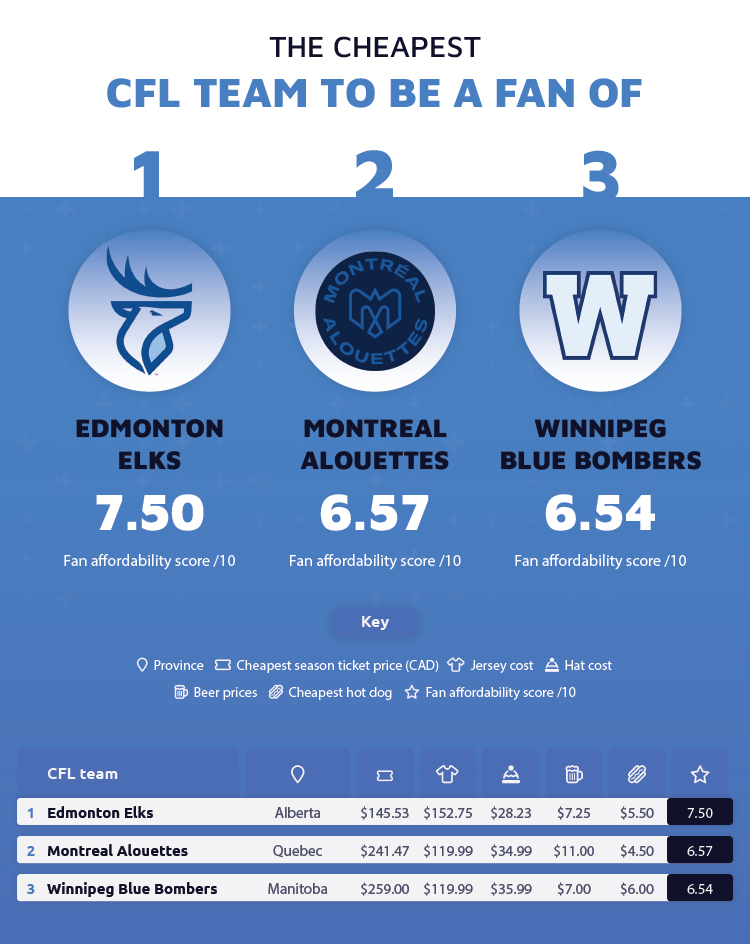 The Edmonton Elks take the crown for the most affordable team to support in the CFL. The Elks have got the cheapest season ticket, as well as the cheapest hat. They also have the second cheapest beer price and hot dog price.

We’ve looked at the average income in each Canadian Province to find out which team will cost you the most of your income. 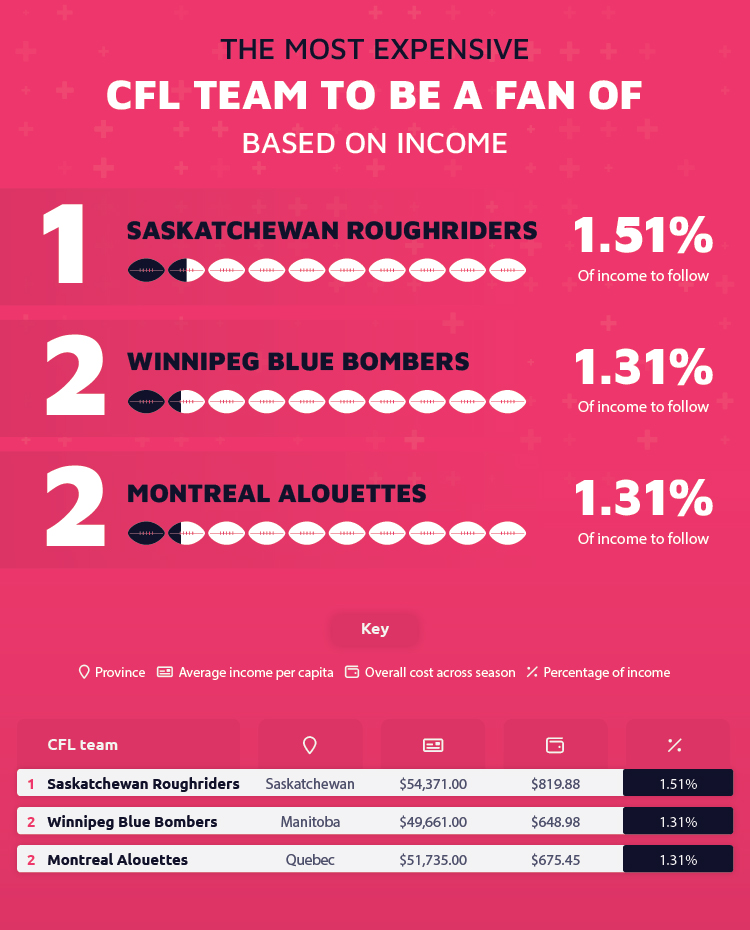 In first place is the Saskatchewan Roughriders. Supporting the Roughriders will cost you 1.51% of your yearly salary. The overall cost to follow them during the season is $819, with the average salary in Saskatchewan sitting at just over $54,000.

The Winnipeg Blue Bombers take second place, costing 1.31% of your annual salary to support. In Manitoba, the province of the Blue Bombers, the average salary is under $50,000, which is the lowest out of the provinces on our list. Despite having the fourth lowest season cost at just under $650, it will cost the Blue Bombers fans 1.31% of their yearly income.

The Montreal Alouettes share second place with the Winnipeg Blue Bombers, with it also costing 1.31% of their fan's yearly salary. Despite the salary being slightly higher in Quebec, at almost $52,000, the cost over a season is also higher at $675.

Looking at the same factors, we found out the cheapest CFL team to be a fan of based on the Province’s yearly salaries. 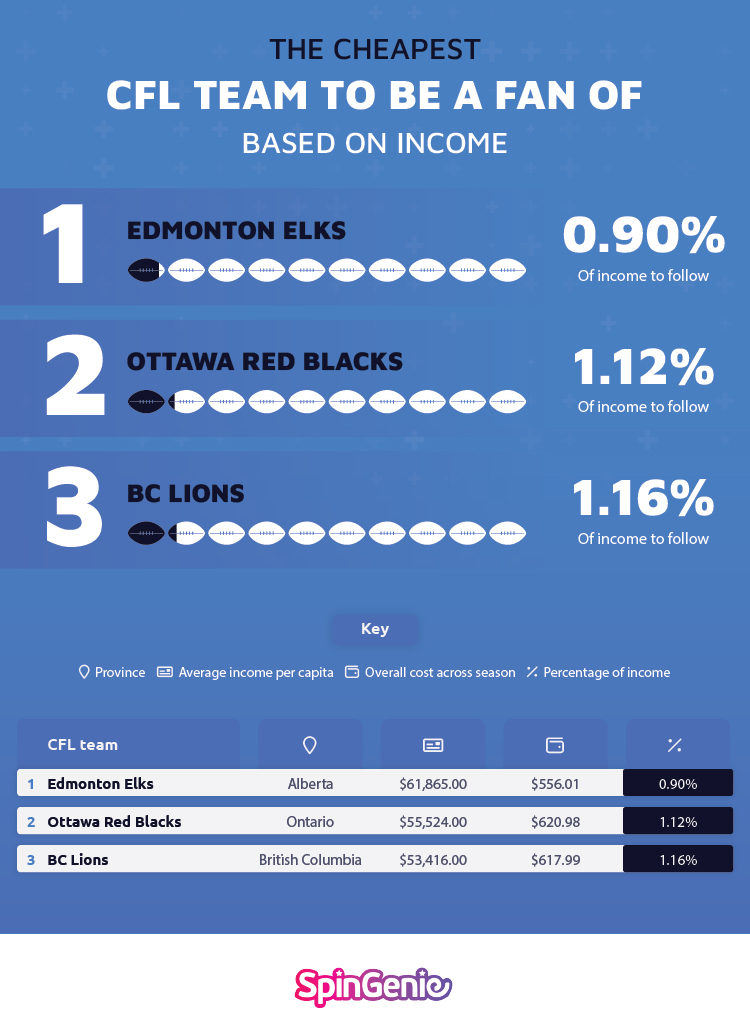 The Edmonton Elks take first place with it costing under 1% of Alberta’s average income to support the team. The average income in Alberta is just under $62,000, which is the highest out of the provinces on our list. The Elks also have the lowest cost over a season at $556, which is $60 lower than any other team.

Ottawa Red Blacks takes second place. It will cost just 1.12% of the average income in Ontario, which is $55,000, to support the team. The cost over a season for the Red Blacks is also the third lowest on our list, at $620.

Completing our top three, costing just 1.16% of the province’s income, is the BC Lions. The Lions are based in British Columbia, where the average income is just over $53,000, which is also the third lowest average income in our list. Watching the Lions will cost you $617 over the season, which is the second-lowest total on our list.

We sourced data for the prices of game day tickets, hot dog, beer, soft drink, team hats, and parking from Team Marketing. For the team jerseys, we used the retail price of an unprinted shirt from NFL Shop.

We then used World Population Review to find the income per capita in each state.

To calculate the overall cost in an NFL season, we multiplied the prices for the matchday ticket, beer, hot dogs, and parking by 9 to represent the highest number of home games an NFL team could play in a regular season. Hat costs and Jersey costs were not multiplied but were added to the overall cost. Soft drink prices were removed from the calculations.

For the CFL, we used club websites to find out the price of the cheapest season ticket for the 2023 season, as well as the retail price for an unprinted jersey, as well as a pom knit hat. We then used Global News to find the price of a beer and hot dog in each stadium.

We then used Insurdinary to find the average income in each Canadian Province.

To calculate the overall cost in a CFL season, we multiplied the prices for beer and hotdogs by 9 to represent the number of home games a CFL team plays in a regular season. Season ticket, jersey, and hat prices were not multiplied but were included in the overall cost. Calgary Stampeders did not display figures for 2023 season tickets and were therefore removed from the data for the cheapest/most expensive team based on income.

Note, figures only represent the cost of going to home games.