Ice hockey is followed by about 80% of Canadians, but how expensive is it to be a true ice hockey fan? The best online casino in Ontario has revealed which teams are the most expensive to support when attending all of their home games. Some of these prices are staggering, with costs reaching over 78% of the average Canadian income!

The average cost of beer, soft drinks, hot dogs, parking, and official team jerseys are included in these estimates, so you can get a real feel for how much it costs to be a fan of each of these NHL teams and where you can find the cheapest NHL tickets.

NHL teams play 82 games per season, playing 41 games at their home ground. General and premium tickets have been considered to estimate how expensive it is to follow each of these teams when purchasing tickets to all home games.

Note: All the following prices are in Canadian dollars (CAD). The average Canadian income was taken as $53,000 retrieved from statcan.

The Most Expensive Teams for Premium Tickets 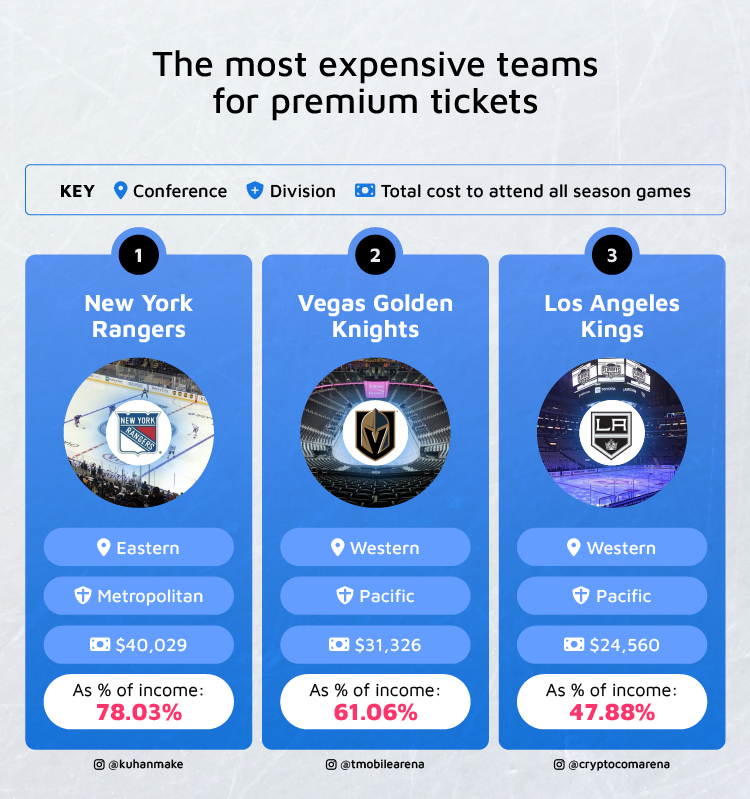 The cost to attend all season games is calculated by summing the cost of a premium ticket for every home game + parking, one beer, and one hot dog per game and the average cost of one jersey.

In third place for the most expensive NHL team to follow is the Los Angeles Kings, coming in at $24,560 to attend all home games with premium tickets, one beer, one hot dog, and a parking spot per game, and a team jersey for the season. This is just under half of Canada’s average income of $53,000. 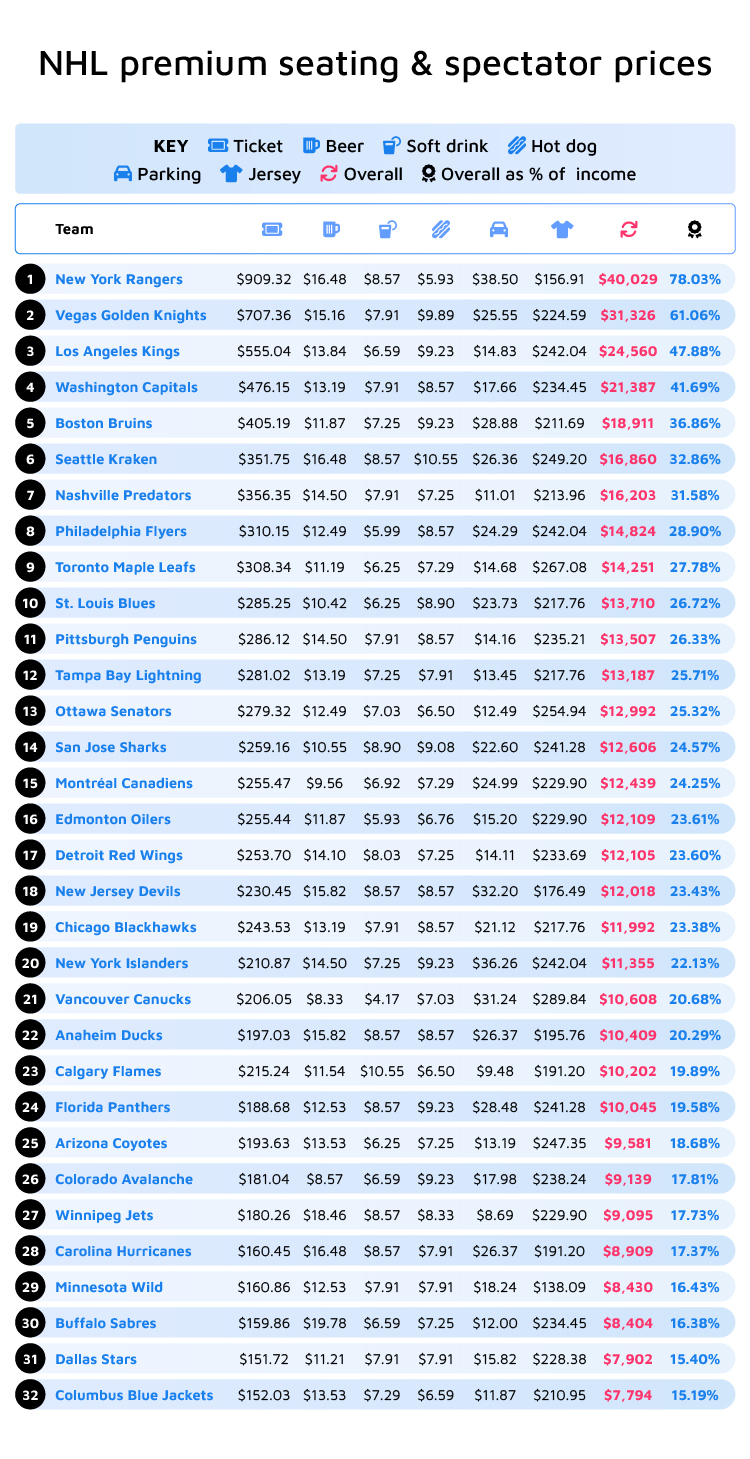 The Most Expensive Teams for General Tickets

The cost to attend all season games is calculated by summing the cost of a general ticket for every home game + parking, 1 beer, and 1 hot dog per game + the average cost of 1 jersey.

The most expensive team when buying general admission tickets is Seattle Kraken. To see all home games with general tickets will run you an estimated $9,512 this season, around 13.03% of the average salary in Canada. Seattle Kraken charges an average of $172.53 per general ticket and $249.20 for an average jersey.

The New York Rangers charge the second largest for general tickets over the season, coming to $9,512 for al 41 home games including beer, food, parking, and their $156.91 average team jersey. The New York Rangers run the most expensive parking, where you can expect to pay around $38.50 for even the lowest priced spots.

The third most expensive NHF team to support when buying general tickets is the Toronto Maple Leafs, who charge just $1 less than the New York Rangers to see their home games. The Toronto Maple Leafs charge the highest average cost for general admissions, at $191.98 per game. 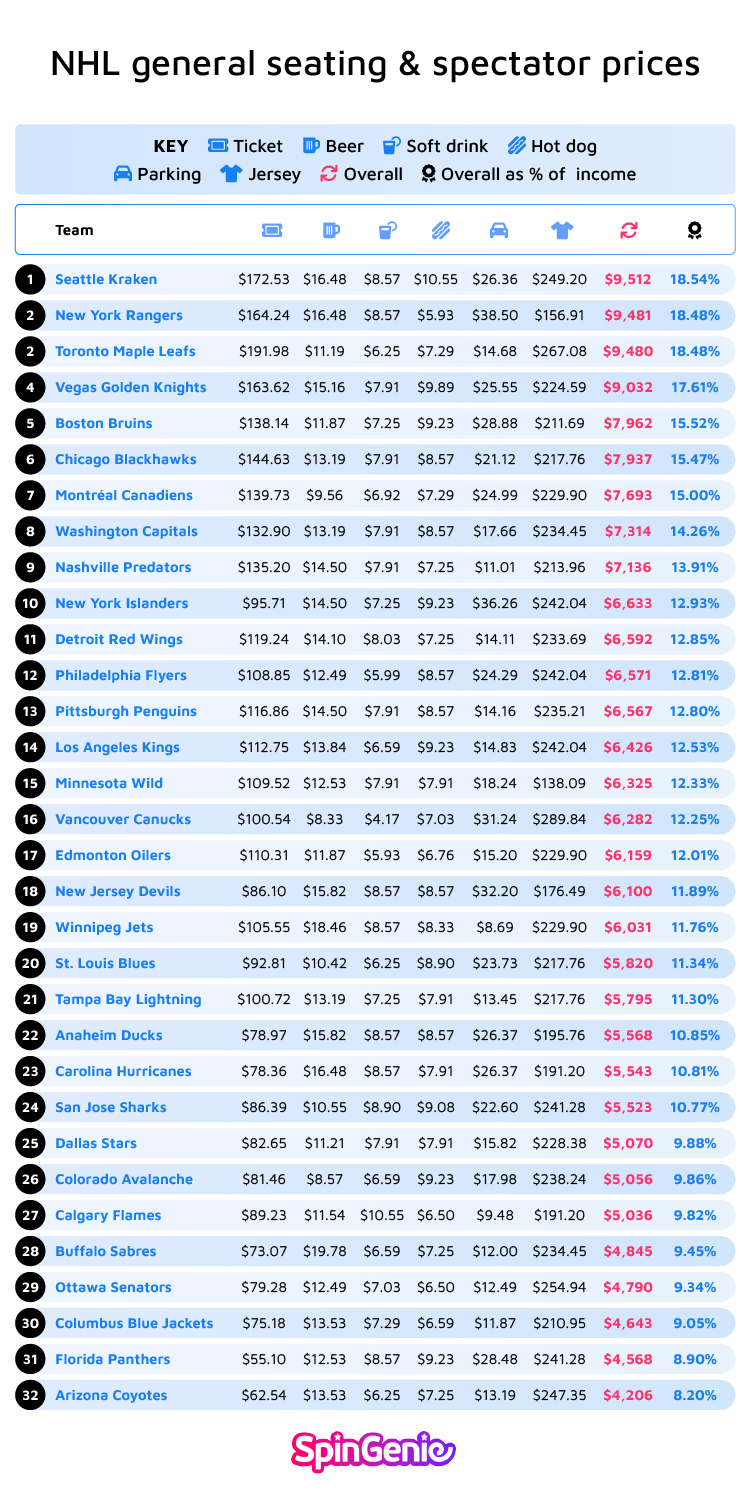 Average cost of Jerseys were taken as the average cost of the most and least expensive jerseys on offer, all data recorded from the relative team’s website.

The cost to attend all season games is calculated by summing the cost of a general or premium ticket for every home game (41 games in total) + 1 beer and 1 hot dog per game + the cheapest parking per game + the average cost of 1 jersey.

The average Canadian income was taken as $53,000 retrieved from statcan.

No discounts were recorded for any data points.

All data shown is in Canadian Dollars (CAD).

* Premium seating (tickets that come with at least one added amenity or classified by team as premium) prices are not included in the average ticket price.

The Most Affordable City Breaks

Most Expensive Cakes In The World