The Most Affordable City Breaks

When it comes to planning your next vacation, we often think of exotic and far-off locations, but what if you just want to escape for a few days? City breaks, without the need to travel abroad offer the perfect solution, and are often cheaper than flying to far-flung destinations. But which Canadian cities won’t break the bank and which will end up being the most expensive?

We at Spin Genie, Ontario’s best online casino, have looked into the affordability of each destination, including hotel stays, the price of restaurants and drinks and the cost of transport to find out.

We’ve also delved into the proportion of attractions in each city, breaking them down into man-made attractions, and natural attractions and looked at heritage sites and events too, to find the best city break destinations Canada has to offer. 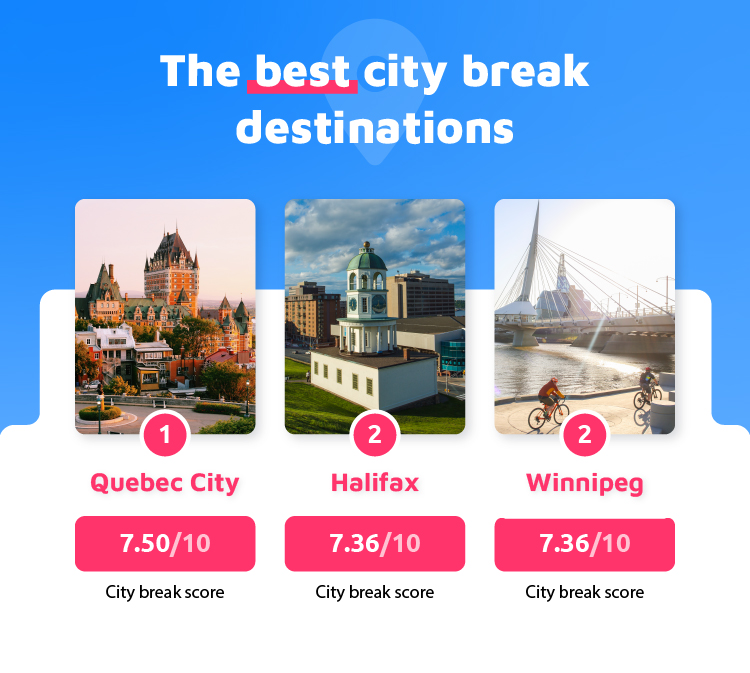 These two cities share second place both scoring 7.36/10. Winnipeg is the highest-scoring city in terms of affordability, taking first place for three of the four factors we looked at.

Halifax scores relatively high across the board, ranking in the top three for five factors. The city takes the top spot for its proportion of heritage sites and is one of the most affordable for restaurants. 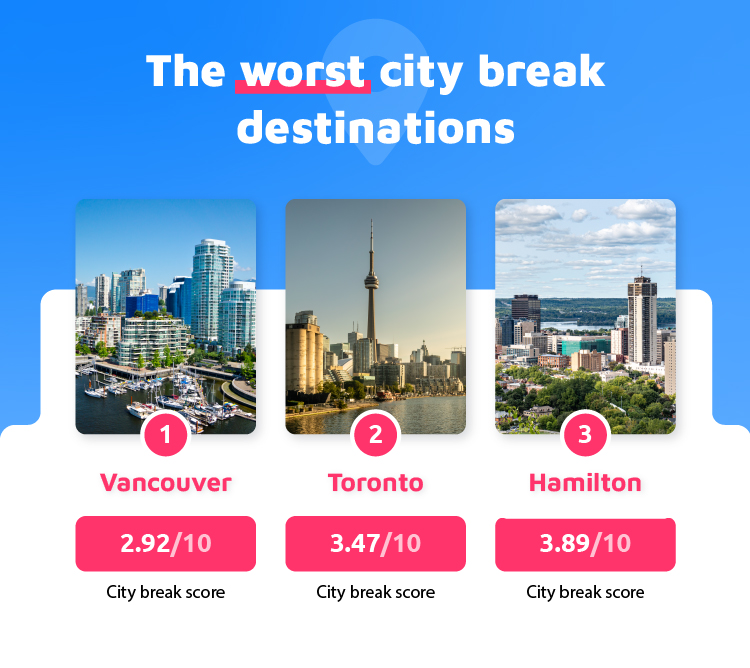 Vancouver has the unfortunate title of the worst city break destination, scoring only 2.92/10. The city ranks in the top three most expensive for three of the affordability factors we looked at. It also has a relatively low proportion of attractions, particularly for events with only 0.1 per 100,000 people.

Up next is Canada’s biggest city, Toronto. The city scores poorly thanks to its low proportion of purpose-built and natural attractions and heritage sites too, ranking in the bottom three for these factors.

Hamilton scores 3.89/10 in our index, ranking in the bottom three for four factors. The city ranks very low when it comes to dining out, being the most expensive for both restaurants and beer. Hamilton also has the lowest proportion of heritage sites too. 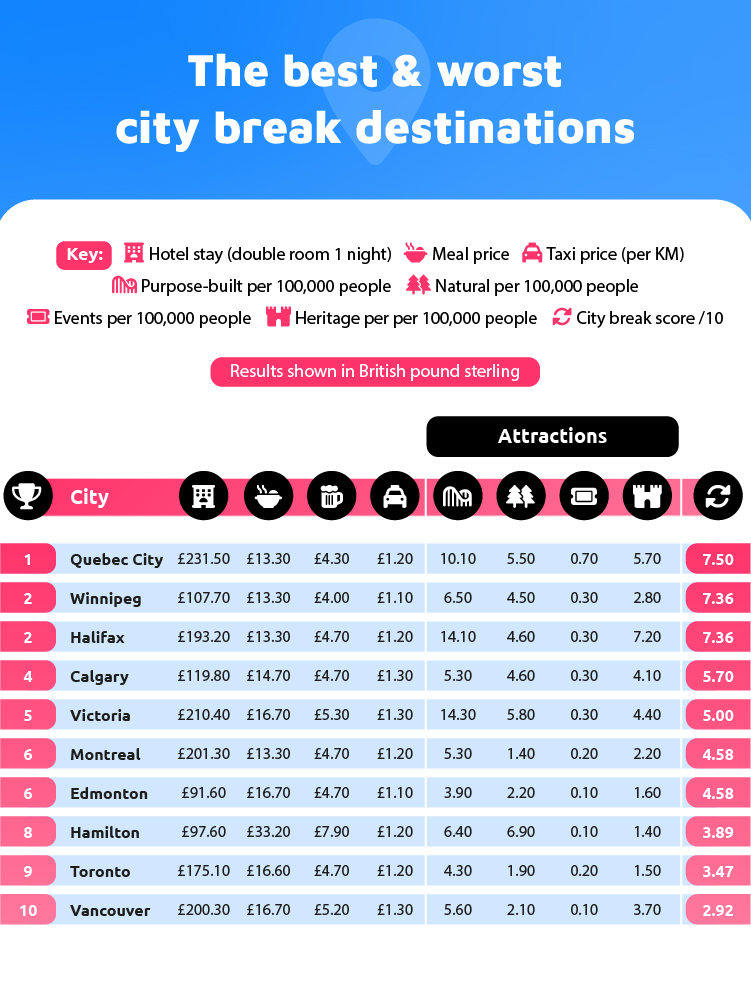 The Cheapest Cities for…

If you’re looking for the perfect place to relax and unwind on a budget, then Edmonton is the ideal destination. The city is the cheapest for accommodation on our list with a weekend stay in the city costing an average of just $138.20 for two people. The city of Alberta hosts festivals year round and major attractions include The Royal Alberta Museum, Elk Island National Park and the Art Gallery of Alberta.

Taking a city break means you get to enjoy some of the best cuisines a city has to offer and often for a bargain too. Four cities share the title of the city with the most inexpensive restaurants, Halifax, Montreal, Quebec City and Winnipeg, all with an average of $20.20 per meal.

If you’re looking to experience all a city has to offer in terms of nightlife then there’s no place better to soak up the atmosphere than the many bars dotted around each city. Affordability is key here too, and Winnipeg has the cheapest drinks in the index, with a beer costing just $6.10.

If you don’t want to hire a car to explore your chosen city, you’ll probably find yourself making use of taxis and the best city for this is Winnipeg. The city is home to several taxi companies, with an average cost of just $1.60 per kilometre.

The Best Cities for…

Victoria is a relatively small city with only 363,000 residents, but it offers a lot of purpose-built attractions to its citizens. From The Royal BC Museum and The Maritime Museum of British Columbia to art galleries like The Bateman Gallery and The Avenue Gallery, as well as specialist attractions like the Victoria Bug Zoo, you’ll never be short of things to do in Victoria.

If you’re looking for more peaceful outdoor attractions, Hamilton is the best destination with  6.9 natural attractions per 100,000 people. It offers visitors the highest total nature and wildlife areas, with 18 in close proximity to the city such as The Fifty Point, Christie Lake and Tiffany Falls conservation areas. The city also offers a wide variety of hiking trails and parks.

If you’re looking for a fun and unique experience during your city break, the best way to do this is to plan it around an event or festival, so you can truly dive into the culture of a destination. Quebec City has visitors spoilt for choice when it comes to events from the culinary-oriented Festibière de Québec celebrating and Québec Table Gourmet to the music Festival d’été de Québec and comedy ComediHa! Fest Québec.

Heritage attractions offer visitors a feel for the history of a location and how this shapes the culture of the modern city. So if you’re a history fan, Halifax is the place to visit, with 7.2 heritage attractions per 100,000 people. These range from the Halifax Citadel, the Prince of Wales Tower and Georges Island to statues celebrating the rich history of the city.

Beginning with a list of Canada’s highest populated cities, we analyzed each one on the following factors. We then gave each city a normalized score out of ten for each of the factors, before taking an average across each of these scores to reach our final overall score out of ten.

Hotel stay: The average weekend price for a hotel room for one night for two people according to Kayak.

Dining out: The average cost of a meal in each city according to Numbeo.

Drinks: The average cost of a 0.5-litre domestic beer in each city according to Numbeo.

Taxis: The average cost of a taxi per kilometre in each city according to Numbeo.

Purpose-built attractions: The number of theme parks, museums and art galleries in each city according to Tripadvisor, per 100,000 of the population.

Natural attractions: The number of parks, hiking trails and nature and wildlife areas in each city according to Tripavisor, per 100,000 of the population.

Events: The number of cultural events and music festivals in each city according to Tripadvisor, per 100,000 of the population.

Heritage attractions: The number of religious sites, historic sites and monuments in each city according to Tripadvisor per 100,000 of the population.

Most Expensive Cakes In The World

Most Expensive Restaurants In Montreal