Sneaker ROI: The sneakers with the highest return on investment

Sneaker culture has exploded in popularity over the last few decades, thanks to the rise of athleisure trends and more comfortable fashion, and sneakerheads often go to extreme lengths to get their hands on rare and exclusive releases.

These highly collectible items often come with a hefty price tag these days whether they’re fresh out of the box or on the resale market. So we at Spin Genie, the best online casino in Ontario, wanted to find out which are the most expensive sneakers of all time, and which kicks have the biggest return on investment.

The Sneakers with the Highest Return on Investment 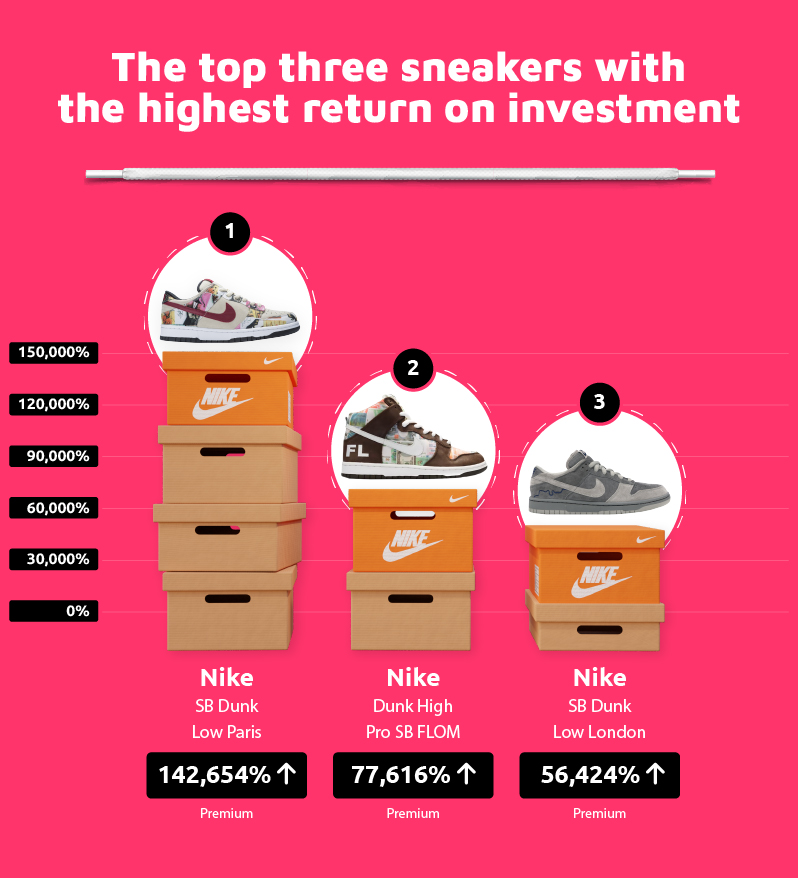 Kicking off the list is the Nike SB Dunk Low Paris. Instantly recognizable to sneakerheads everywhere, these Dunks are incredibly rare with only 202 pairs ever made. Each pair also features differently cut panels from printed artwork by Bernard Buffet, making them completely unique. Thanks to their rarity and one-of-a-kind panels these shoes have a whopping 142,654% return on investment.

One of the rarest Nike SBs ever created, only three pairs of these Dunk highs were raffled to the public in 2005. Designed in collaboration with the New York graffiti artist Futura, FLOM (short for For Love or Money) Dunk Highs feature a tile pattern created from different denominations of banknotes.

Rounding off the top three is yet another pair of SB Dunks. Dunk Low Londons have a premium of more than 56,000% and set collectors back an average of $26,122. These kicks feature an embroidered River Thames on the side heel and a gray colorway meant to reflect London’s cloudy skies.

Released as part of Nike SB’s White Dunk: Evolution of an Icon event, only 202 pairs were ever made. 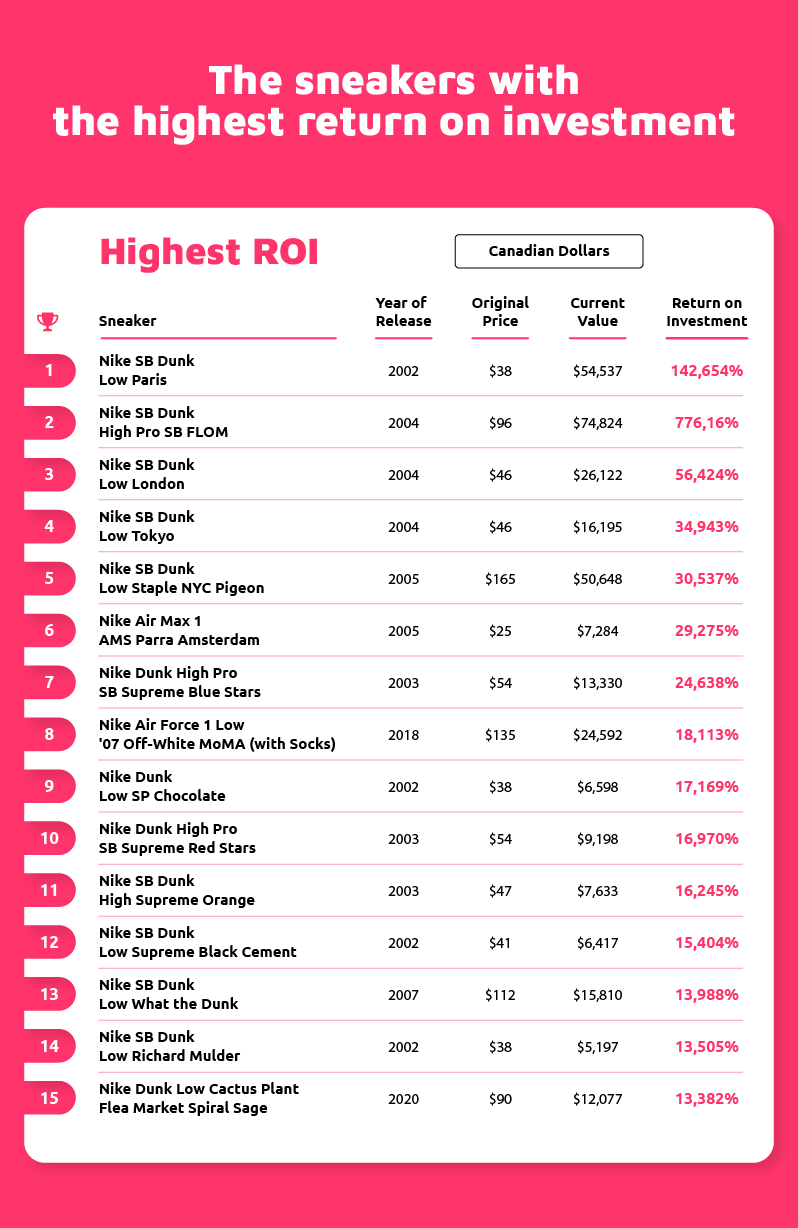 The Sneakers with the Lowest Return on Investment 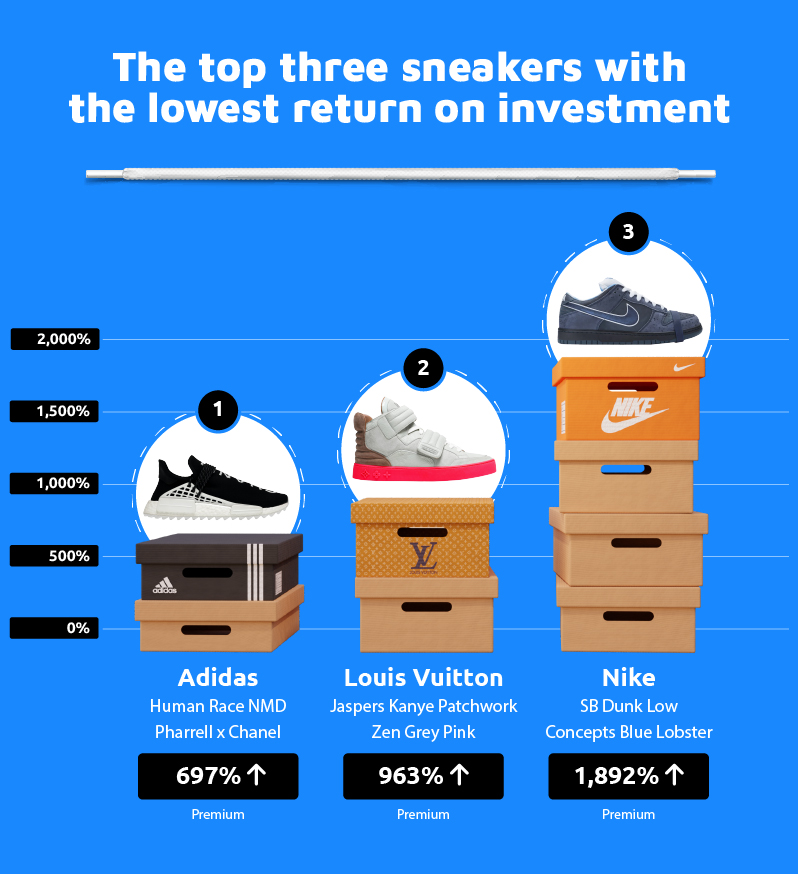 Originally exclusive to Chanel’s temporary pop-up shop at Colette in Paris, these sneaks will set collectors back an average of $7,132.

Designed in collaboration with musician Pharrel and fashion powerhouse Chanel, the shoe has a simple black-and-white colorway highlighted by 'Pharrell' and 'Chanel' printed on top of the left and right shoe’s vamp and has a return on investment of nearly 700%.

Up next is the Louis Vuitton x Kanye West collaboration released in 2009. Named after Kanye’s personal stylist Ibn Jasper, the pink colorway is the most coveted by sneakerheads.

Taking third place is Nike’s second collaboration with the New England streetwear retailer Concepts as they only have a return on investment of 1892%, retailing at an average of $4,382.

These Dunks were inspired by the crustacean with the same name and featured a blue and white lining and a rubber band around the toe as a nod to the bands used to secure lobster claws. 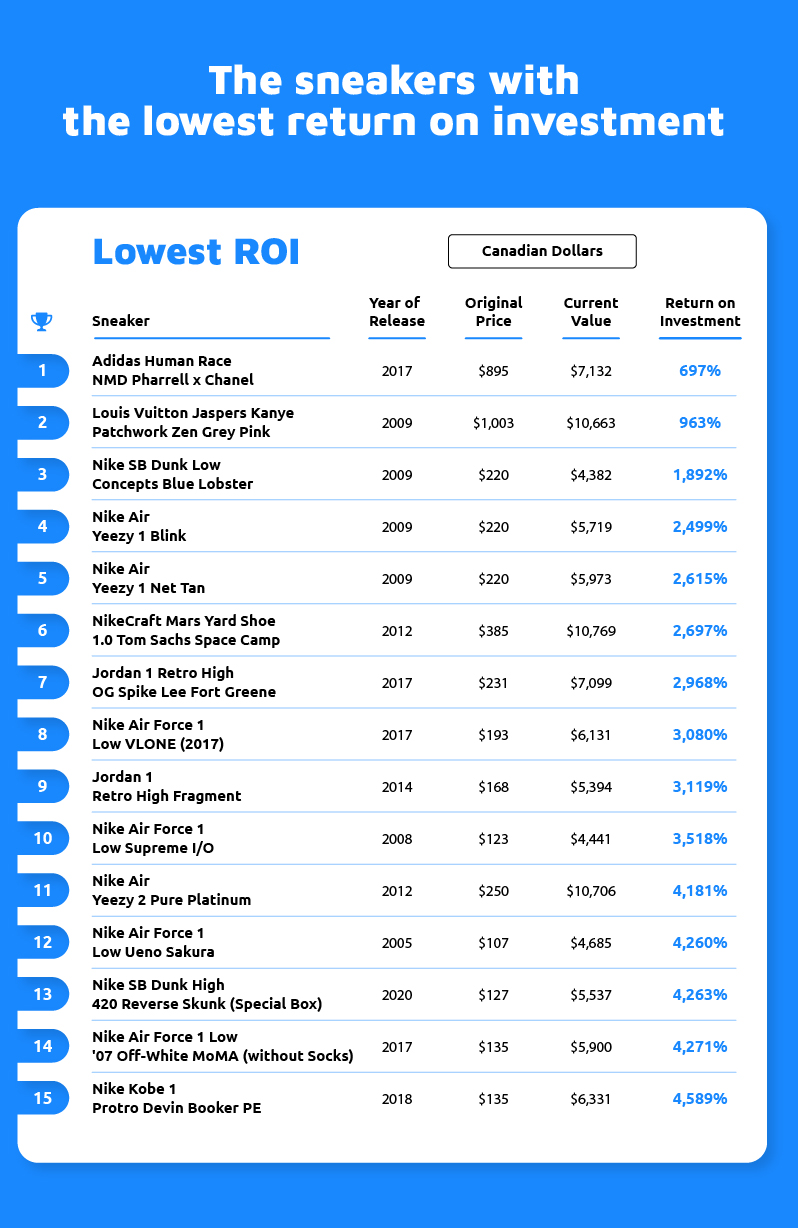 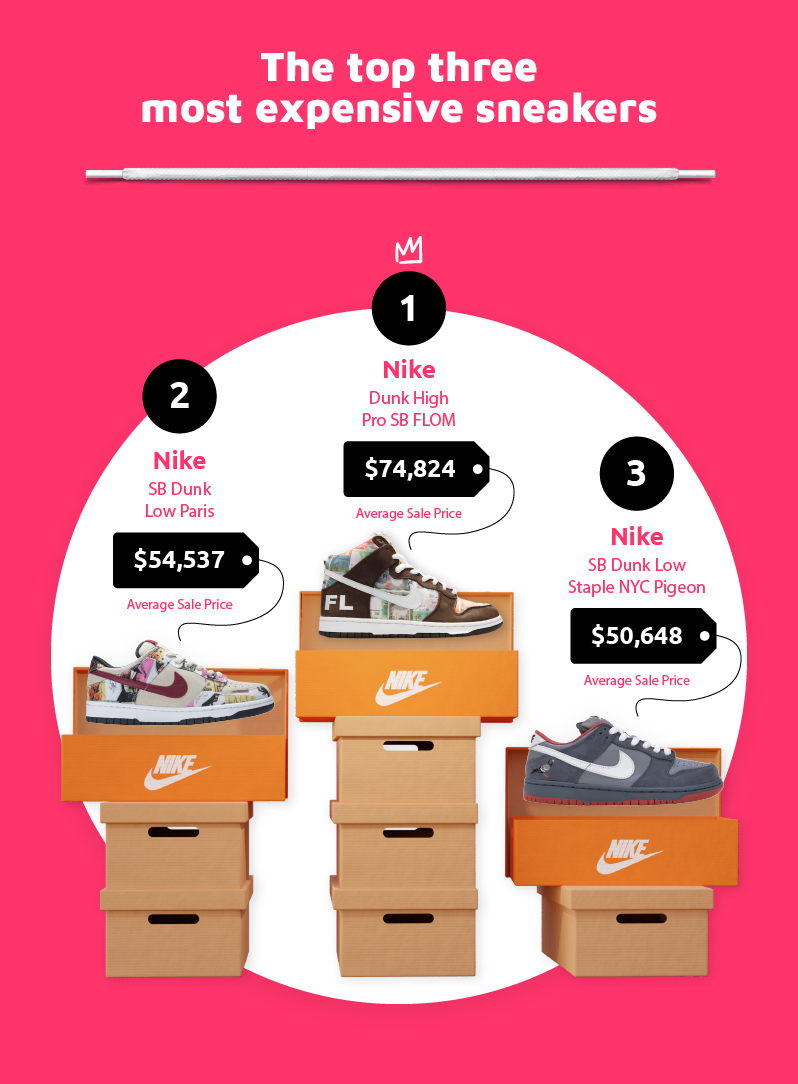 The Nike Dunk High Pro SB FLOM takes the top spot as the most expensive sneaker, retailing at an average of $74,824. Its price is astronomical thanks to its rarity, making it the holy grail of sneaker collecting. Only 24 pairs were ever made and only three were made available to the public.

Up next is the iconic Nike SB Dunk Low Paris, with an average resale price of $54,537. These kicks were originally released as part of Nike SB’s travelling White Dunk Exhibition in 2003, paying homage to the city of Paris. Originally intended to be raffled off during the exhibition, they were sold at select stores as a result of the massive demand for the extremely exclusive sneaker.

In third place is the Nike SB Dunk Low Staple NYC Pigeon, also released as part of the White Dunk Exhibition. These sneakers nearly caused a riot when they were released and police had to be called to keep order at the New York store that sold them. The NYC Pigeon Dunks were produced in a limited run of only 150 pairs, and fetch an average of $50,648 on the resale market. 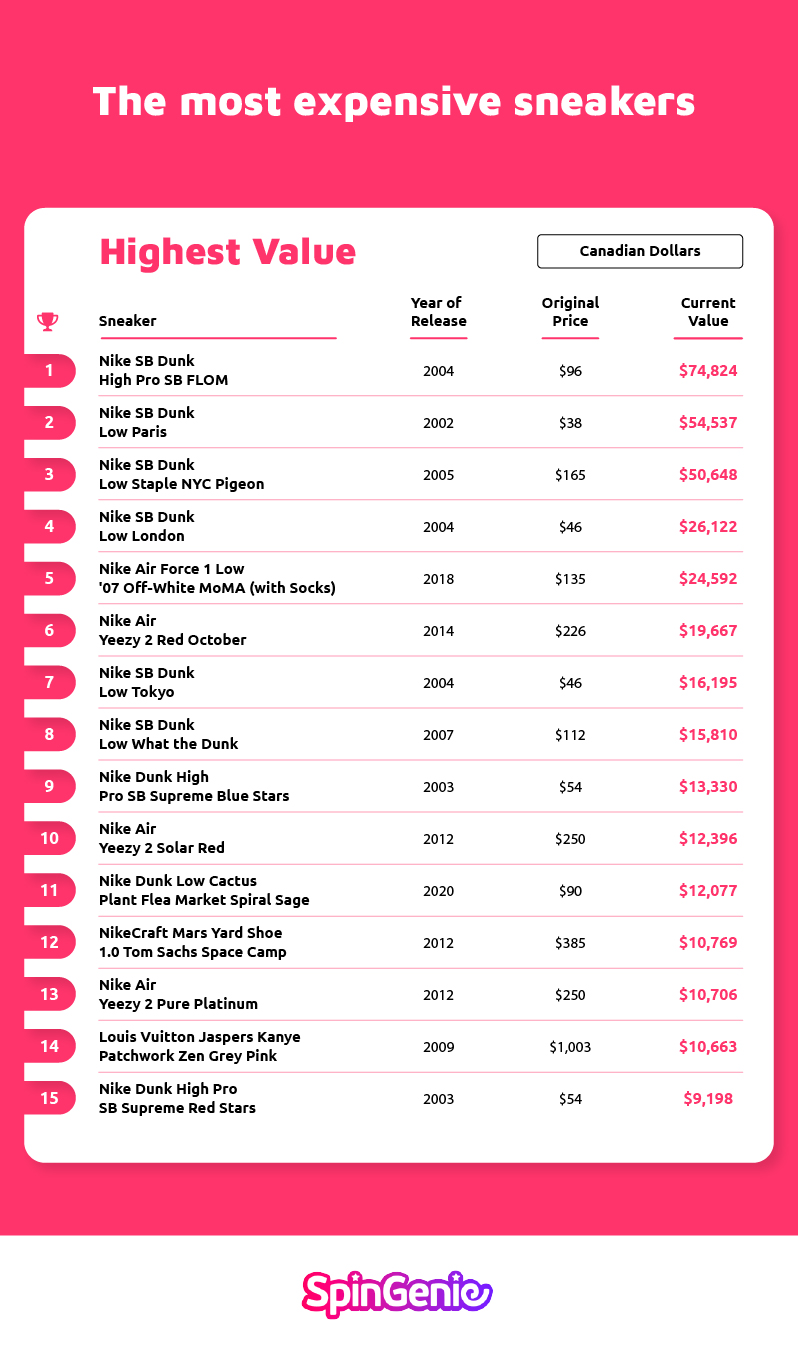 We conducted research into 50 pairs of sneakers which give a significant return on investment, alongside the original price and current value.

The research utilized pricing information available on stockx.com, with the current value based on historical sales on the platform over the past 12 months.

Only sneaker models which have been available on general sale to purchase by the public have been included in the research. Those released as promotional models (or only to friends and family of the brands) were excluded, as these have no original price figures available.

Original prices were converted from US$ to CA$ using the average annual exchange rate from the year each sneaker was released, back to 1990 according to OFX.

Most Expensive Type of Betta Fish