The Best Cities in Canada to Enjoy a Luxury Getaway

With 5-star hotels, designer shops, and fine dining opportunities around every corner, Spin Genie, Ontario’s best online casino, has analyzed the best cities in Canada for a luxurious getaway. So book your next trip to Toronto's CN Tower or Vancouver's Stanley Park and enjoy a luxury holiday in one of the most luxurious cities in Canada.

Canada may not be the first country that springs to mind when we think of luxury, rather, we’d often think of dramatic scenery such as Banff National Park or the Rocky Mountains. However, Canada offers some of the most luxurious city break experiences in the world. 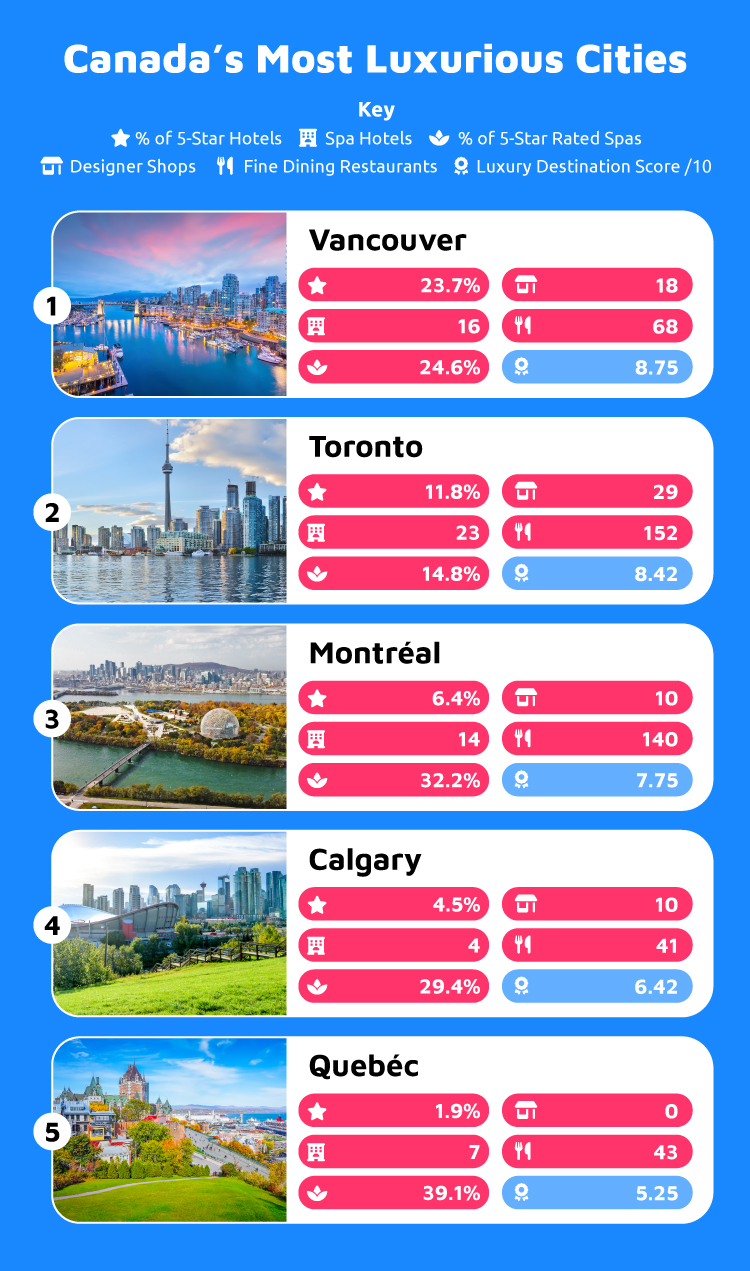 The most luxurious Canadian city is Vancouver, earning a luxury destination score of 8.75/10. Vancouver has the largest choice when it comes to 5-star hotels, with 18 on offer throughout the city 23.7% of them are 5-stars.

Vancouver is a visually stunning coastal city framed by the Pacific Ocean and the Coast Mountains. The perfect way to explore the city is along the almost 30 km of waterfront pathways that surround Vancouver’s vibrant neighbourhoods.

Toronto ranks as the second most luxurious city in Canada, with a luxury destination score of 8.42/10. Toronto earns this score by having the highest number of spas, spa hotels, designer shops, and fine dining restaurants out of all Canadian cities analyzed in this report.

If you decide Toronto is the luxury vacation for you, be sure to visit the must-see Bata Museum. This unique footwear museum shows off everything from indigenous Inuit boots to Elton John’s silver platforms.

Montréal ranks third for best luxury getaways in Canada, earning a cool 7.75/10 luxury destination score. Montréal has an excellent amount of choice when it comes to good eating, with 140 restaurants offering fine dining experiences throughout the city.

Set on an island in the Saint Lawrence River, Montréal is considered the cultural capital of Canada. Be sure to stop by the Notre-Dame Basilica, Montreal's oldest Catholic church, and the Plateau Mont-Royal district for an unforgettable cultural experience.

In fourth place is the city of Calgary, which earns a luxury destination score of 6.42/10. Calgary has 7 out of the 10 designer shopping brands available within the city, and over 100 spas to choose from to relax and unwind, 29.4% of which are 5-star rated.

Quebéc completes the top 5 most luxurious Canadian cities, earning a luxury destination score of 5.25/10, despite having no designer shops to peruse. There are is a good 39.1% of spas in the city which are rated 5-star, so Quebéc is an excellent choice for relaxation.

Quebéc shows off some truly beautiful architecture, with stone buildings, narrow streets, the towering Château Frontenac Hotel and the imposing Citadelle of Québec. The Petit Champlain district is known for its bistros and boutique which line its cobblestone streets. 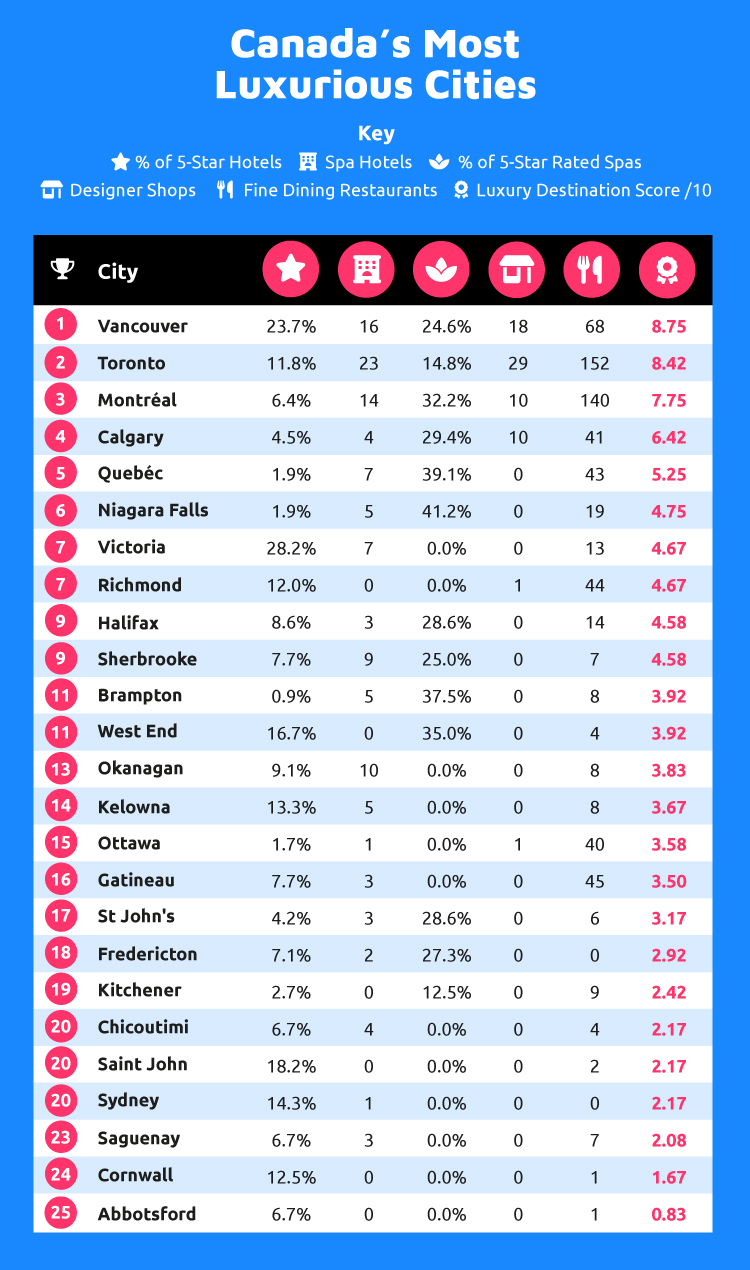 For those of us on a budget but still wanting to experience the best that Canada has to offer, look no further than this list of affordable luxury getaways. Compare the average cost of a night's stay in a 5-star hotel and the average cost of renting a luxury car or SUV in the 25 most luxurious Canadian Cities. 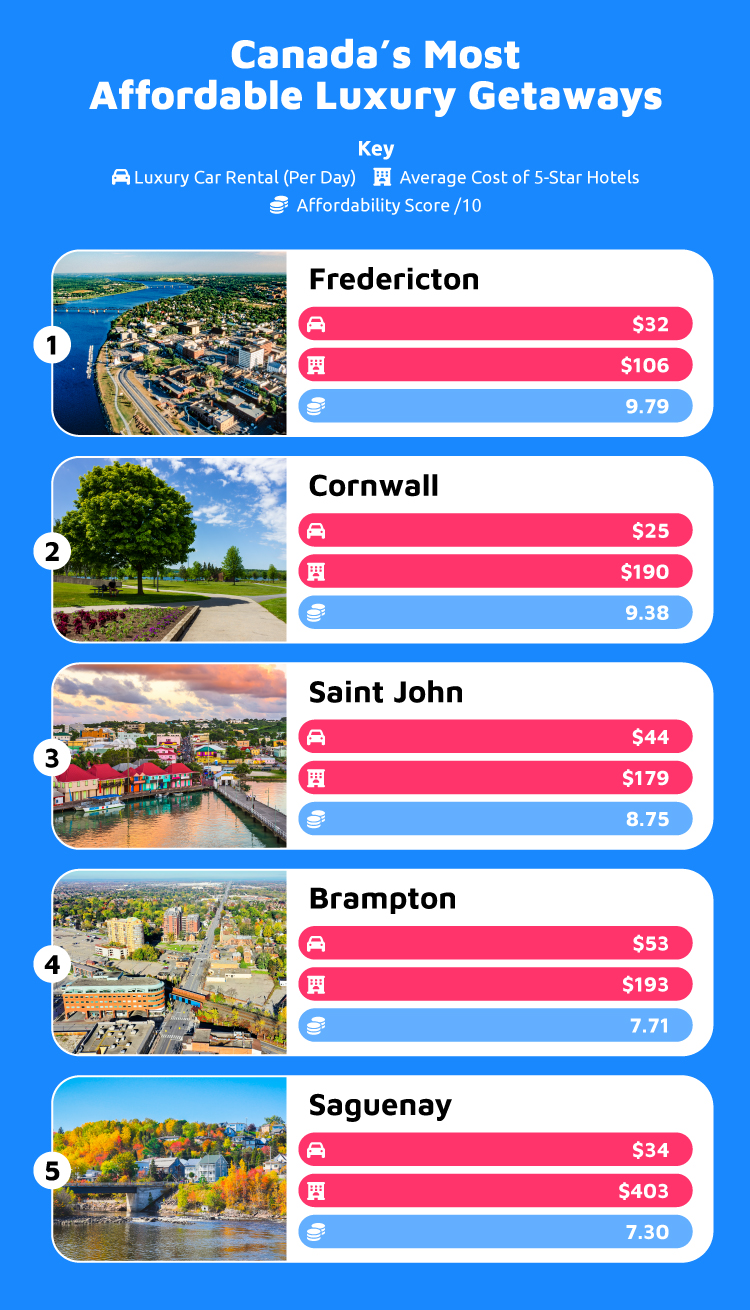 Frederiction ranks as the most affordable luxury city escape. With the average cost of staying in a 5-star hotel at just $106 and the ability to rent out and enjoy a luxury car at just $32, you can have an amazing luxury holiday without breaking the bank.

Fredericton is the cultural hub and capital of New Brunswick. It is known for its Historic Garrison District, which was once home to an 18th-century British army base and has now become a base for numerous artists’ studios and an outdoor theatre.

Cornwall comes in runner-up position as the second most affordable luxury destination. With cheaper car rentals but more expensive 5-star hotel rooms, Cornwall comes in close behind Frederiction with a score of 9.38/10.

Cornwall is one of the oldest settlements in Canada and lies on the north bank of the St. Lawrence River. Visit the famous Saunders Hydro Dam or wander along the many waterfront trails to enjoy the calming river scenery.

Saint John (be careful not to confuse this with St John’s, another big Canadian city) ranks third for affordability on this luxury destinations list. With 5-star hotels coming to an average of $179 and luxury car rentals coming to $44, Saint John scores 8.75/10.

Saint John has a lot to offer for holiday-goers. The 1913 Imperial Theatre stages plays, concerts, and dances all year long, and the city is known for its reversing rapids caused by the bay tides which collide with the Saint John River.

Brampton scores 7.71/10 for luxury affordability, earning fourth place on this list. Brampton’s 5-star hotels are near the $200 mark at an average of $193, and the average cost of a luxury car rental comes to $53.

Home to the Rose Theatre, a major performing arts venue, the Garden Square, which hosts big-screen movies and live events, and Gage Park, offering some picturesque floral gardens, Brampton is a must-visit for luxury getaways in Canada.

Saguenay completes our top 5 for the most affordable luxury escapes in Canada, earning an affordability score of 7.3/10. Despite reaching our top 5 most affordable destinations, the average price of a 5-star hotel is still a whopping $403!

Saguenay is a must-visit for the thrill seeker, with an array of ski and bike trails which wind through the riverside Parc de la Rivière-du-Moulin. Visit the Saguenay Fjord National Park for some more relaxing outdoor adventures. 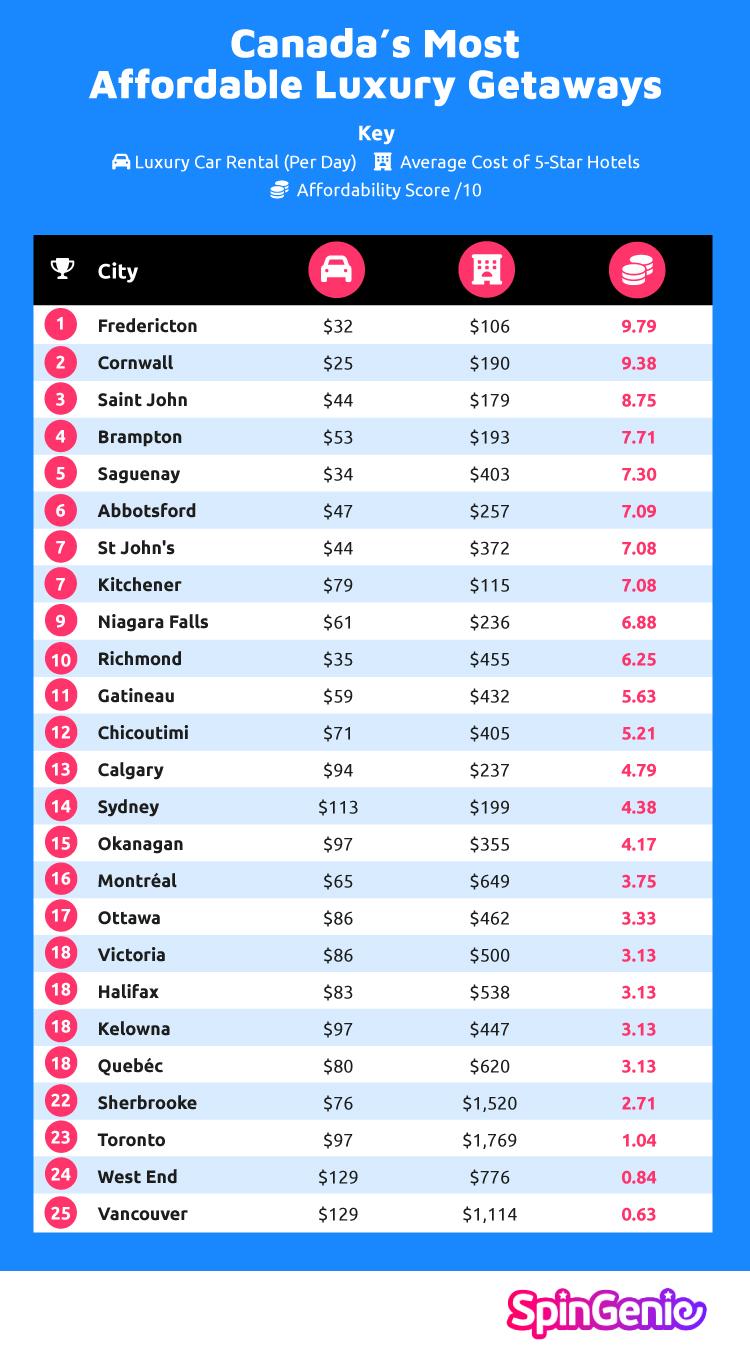 The number of spas and fine dining restaurants in each city was taken from Tripadvisor.

The Most Expensive Gaming Mouse